Donald Trump’s threats come at a time when Michigan is facing a $3.2 billion shortfall this year, a pandemic-induced budget deficit, and expects federal aid.

US President Donald Trump on May 20 threatened to withhold federal funding to the state of Michigan after it sent absentee ballots applications to voters amid the coronavirus pandemic. Ahead of elections, the local election clerk mails applications to 7.7 million registered voters in Michigan. However, due to the pandemic, people were given the option to register for the permanent absent voter list in order to vote via email, as per local reports.

"Michigan sends absentee ballots to 7.7 million people ahead of Primaries and the General Election. This was done illegally and without authorization by a rogue Secretary of State," Trump wrote on Twitter. In further threads, Further, he said, Benson's decision was "done illegally and without authorization." He went on to add that he will ask to hold up funding to Michigan "if they want to go down this voter fraud path."

Speaking about the decision to the press conference, Michigan's Secretary of State Jocelyn Benson said that by mailing applications, the state has ensured that no Michigander had to choose between their health and their right to vote. He added, many states are searching for a safe way to hold the November elections amid the coronavirus pandemic. 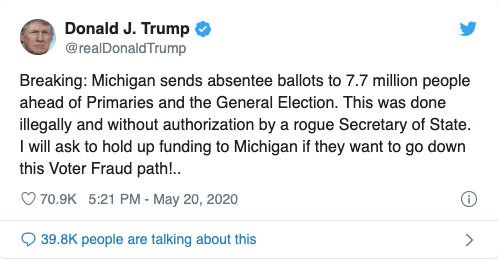 While the Democrats reportedly supported the applications regarding vote-by-mail to secure social distancing guidelines, the knowledge of the same aggravated Trump, who claimed, “it promotes fraud”. In further thread to his tweet, Trump tagged his chief of staff Mark Meadows, the US Treasury and Russ Vought, director of the federal Office of Management and Budget. Not just that, President Trump also threatened the state of Nevada for sending "illegal vote by mail ballots." "They can't!", Trump wrote in Tweets, "If they do, 'I think' I can hold up funds to the state. Sorry, but you must not cheat in elections."

Read: Biden: Trump 'did Nothing' As Pandemic Spread 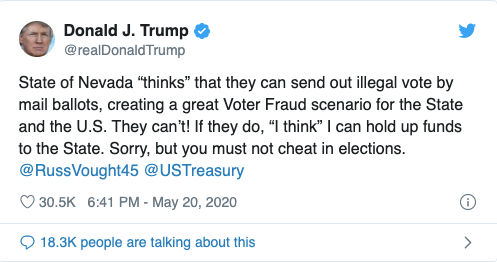 Hi! ðŸ‘‹ðŸ¼ I also have a name, it’s Jocelyn Benson. And we sent applications, not ballots. Just like my GOP colleagues in Iowa, Georgia, Nebraska and West Virginia. https://t.co/kBsu4nHvOy

$3.2 billion shortfall in the current year

This comes as US Representative Rashida Tlaib, D-Detroit, fired back at Trump May 20th early morning on Twitter, calling him "President Incompetent." Meanwhile, Benson responded on Twitter, noting the state planned to send applications, not ballots to qualified voters. In a statement, Benson's spokesman Jake Rollow defending the state’s decision was quoted saying that applications were mailed nearly every election cycle by both major parties and countless advocacy and nonpartisan organizations.

The state had full authority to mail applications to ensure voters that voters know they have the right to vote safely by mail, he added. Trump’s threats come at a time when Michigan is facing a $3.2 billion shortfall in the current year, a pandemic-induced budget deficit, and has been expecting federal aid, according to US media reports.