In one of his purported e-mails from February 2020, Dr Anthony Fauci had shunned the research by the IIT Delhi team that raised questions over COVID origins 
With a group of IIT researchers raising suspicion over the origins of COVID-19 as early as January 2020, the alarm bells rung by the Indians were apparently discredited by America's top medical expert Dr Anthony Fauci entirely too early. In one of his purported e-mails out of the thousands from February 2020 that have now gone public, Dr Anthony Fauci - who heads the US National Institute of Allergy and Infectious Diseases (NIAID) - had shunned the research by the IIT Delhi team that raised questions over the natural occurrence of SARS-CoV-2, the virus that causes COVID-19.

In the e-mail, which has now been accessed by Republic Media Network, responding to a question about the Indian paper, Dr Anthony Fauci had termed the research paper 'really outlandish' without giving any reason to support his statement. The Indian team of researchers, comprising of professors and PhD students from IIT Delhi, had found that the proteins of SARS-CoV-2 were similar to that of some strains of the HIV-1 virus that causes AIDS.

"The Indian paper is really outlandish. Agree about Jon Cohen's nice summary," Fauci replied in response to the question about the Indian research paper that drew the link between COVID and HIV in the purported e-mail.

(Republic cannot verify the veracity of the below email; sections also appear redacted) 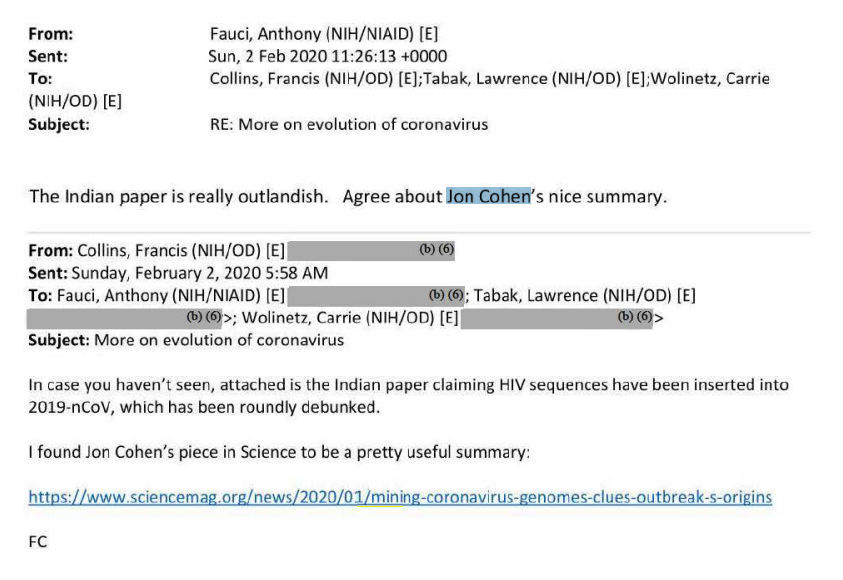 The contentious e-mail comes at a time when Dr Fauci has been under intense scrutiny for allegedly possessing information about the dangerous 'gain of function' research taking place at the Wuhan Institute of Virology. There have also been claims of the NIAID, headed by Dr Fauci, having funded the Gain of Function research in China - which has been refuted by the American infectious diseases' expert. Significantly, a 180-degree flip has been observed in Dr Fauci's stance as he went from brushing the lab-leak claims aside as one of the plenty 'conspiracy theories' to now demanding a full-fledged probe against China.

While the clamour seeking an investigative probe into the origins continues to grow, Republic has uncovered that an Indian group of IIT-Delhi researchers and professors, and also researchers from KSBS and Acharya Narendra Dev College had raised doubts over the 'uncanny and unnatural' behavior of the COVID-19 virus. The study conducted genome sequencing of the SARS-CoV-2 virus to understand the peculiarity of the virus and compared it to - SARS-CoV-1 - the cause of the first SARS outbreak in the early 2000s. Further, two things are of note - that a link was drawn to the extremely dangerous HIV-1 virus, and the researchers also faced enormous cyber-bullying, following which they withdrew their research from the prestigious journal in which they'd published, and then struggled to re-publish it over the next 4 months.

During the course of the research, the IIT-Delhi associates found four small but unique insertions in the spike protein of the virus. On further analyses, these unique short inserts were similar to the proteins of similar function in some strains of the HIV-1 virus that causes AIDS. Moreover, the molecular modeling of the spike protein indicated that these four regions occupied positions formed possible interaction interfaces, which could possibly explain human receptor specificity.

In a recent interview with PolitiFact, Dr Fauci discredited the theory that the SARS-CoV-2 has developed naturally and that it made a jump from bats to humans in a wet market, as claimed. The top medical expert had said that he is not convinced with the claims and that the investigation in China should continue. Maintaining that the notion that the Coronavirus emerged from an animal reservoir is a popular one, Fauci in the interview that was aired on May 12, had said that he is 'personally in favour' of any investigation that looks into the origins of the virus.

Shortly before Dr Fauci himself became embroiled as a potential player in the debate over the possible origins of COVID-19, in March, in response to the views of former US-CDC director Robert Redfield (a Trump appointee) who espoused the idea that the virus was created in a lab and then escaped possibly by mistake, Fauci had said that it was only one of several theories. As per reports, Dr Fauci analysed the lab-escape theory being founded on the finding that the COVID-19 virus was already well adapted to infecting humans when it was first identified in earnest in late December 2019. However, he argued that by that time the virus had already actually been in circulation for a number of weeks and this was plenty of time to adapt itself for humans.