US Secretary of State Mike Pompeo has condemned the arrest of Kremlin critic Alexei Navalny. Taking to his official Twitter handle, Pompeo wrote, "Deeply troubled by Russia's decision to arrest Aleksey Navalny". He added, hinting at Russian President Vladimir Putin, "Confident political leaders do not fear competing voices, nor see the need to commit violence against or wrongfully detain, political opponents". Russian opposition leader and Putin's rival, on January 17, returned to Moscow after convalescing in Germany for several months since August, following his poisoning onboard a plane with a nerve agent Novichok.

Navalny and his wife Yulia landed in the Russian capital at a different airport than had been scheduled, diverting the plane as Police officers and guards waited at a terminal of Moscow's Vnukovo airport to arrest him. The Kremlin critic was arrested at Moscow's Sheremetyevo airport at passport control. Several officials and diplomats in the United States, the European Union, Canada and a senior aide to US President-elect Joe Biden urged the Russian government to free Navalny, as the EU threatened sanctions against Moscow. Biden’s national security adviser elect Jake Sullivan condemned the arrest, as he wrote on Twitter: 'Mr. Navalny should be immediately released, and the perpetrators of the outrageous attack on his life must be held accountable".

Read: Navalny Plans To Return To Russia After Recovery In Germany 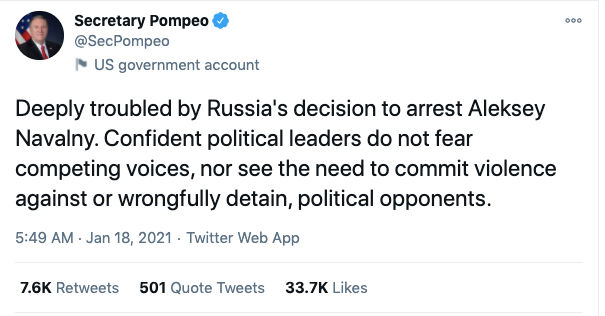 Navalny’s arrest was expected as Russia’s Federal Penitentiary Service (FSIN) had warned that upon entering the country, the opposition leader would be held in custody. Kremlin arch-foe was accused of violating the probation that he received for 2014 conviction on charges of embezzlement and money laundering. FSIN had warned that it will ‘immediately’ take Navalny under arrest when he returns from Germany for flouting the suspended sentence.

The FSIN, in a statement, said Thursday that it issued an arrest warrant for Navalny in late December after he failed to report to its office. Prison service had appealed to the Moscow court to overturn Navalny's 3 1/2 years sentence for fraud, adding that the law was “obliged to take all the necessary action to detain Navalny pending the court's ruling". Meanwhile the 44-year-old opposition leader, despite detention threats had informed that he booked a flight, stressing that he will arrive in Russia on January 17. “Coming home,” he wrote.

Read: Navalny Flies Back 'home' To Russia Despite Arrest Threats From Prison Service