Photographer Ute-Christin Cowan decided to give the 61-year-old TV personality a tribute which she deserves by an epic cake smash Ellen themed photoshoot.

Photographer Ute-Christin Cowan is a huge fan of the Ellen DeGeneres Show. As the show's 17th season is about to start, the photographer decided to give the 61-year-old TV personality a tribute which she deserves by an epic cake smash Ellen-themed photoshoot. Cowan has been a fan of Ellen DeGeneres ever since she shifted to the United States from Germany 17 years ago. An award-winning newborn and child photographer in Milford is getting a lot of attention after receiving a nod of approval from Ellen DeGeneres herself.

An ode to Ellen

Ute-Christin Cowan claims that Ellen's talk show is a regular source of support and inspiration for her as she had to deal with life in a new country, college studies, finding a job, getting married and also becoming a mother of two children. She also established her own business and the talk show provided her with sparks of positivity throughout her journey. The child photographer decided to celebrate Ellen with a photoshoot featuring 1-year-old Ariella from Milford and Jade Ramos who made the cake and helped her with the set decoration. The toddler caught the attention of Ellen DeGeneres and prompted her to share the photo with the caption, 'This is my kind of party.'

The photographer reported that she gets a lot of cake smashes throughout the year and people always request mostly Disney characters, food or color setup. But she chose the Ellen set up so that she could remind everyone to be kind. She hopes to spread the message of kindness and fun at the same time when the world sorely needs the spirit. She hopes to meet Ellen in person and shake her hand as well.

We did every month with of my daughter's first year with your emojis. Her first birthday pics were done with the banner of them all. The Ellen in her name is after you. 😁❤ pic.twitter.com/PuODw6hOy0 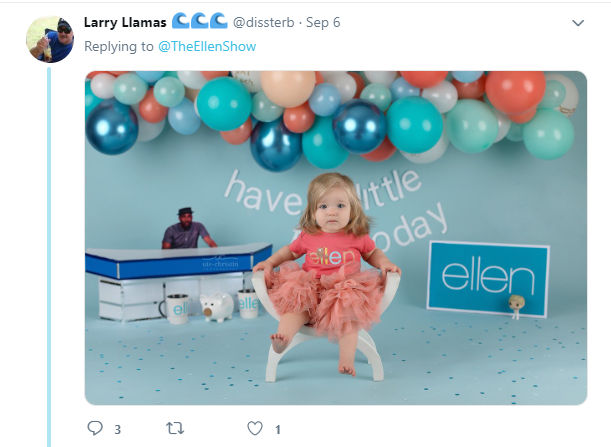 READ: Priyanka Chopra: Buying A Home And Having A Baby Are On My To-do List