NYPD deployed a “creepy” blue coloured robot dog with camera modules, lights, and walkie-talkies sprinting around the town that looked nothing like a K-9.

Residents in Bronx, New York City on Tuesday woke up to find a “creepy” blue coloured robot dog with cameras, lights, and walkie-talkies sprinting around the town that looked nothing like a K-9. Later identified as the New York Police Department (NYPD)’s Digidog, the 70 pound Boston Dynamics machine was learned to have been newly deployed by the officers to diffuse the ‘home invasion’ instances. Running on trial basis, the digital police dog has already participated in 2 hostage situations [later confirmed to be a false alarm] and is named ‘Spot’ by the police officers. Although, Spot has attracted some weird reactions from the inhabitants of the city as well as politicians as it was spotted climbing the stairs in footages that emerged, reminding people of the dystopian science fiction movie Black Mirror.

As it patrolled the streets of Brooklyn, Queens, and until recently Bronx for the NYPD, the electric motorised dog was met with distinctive looks by onlookers. According to New York’s broadcasters, the unweaponised robot dog was found recording the scenes on surveillance cam cabled to a transmitter, zooming in and zooming out and beaming back the footages to the police officers. 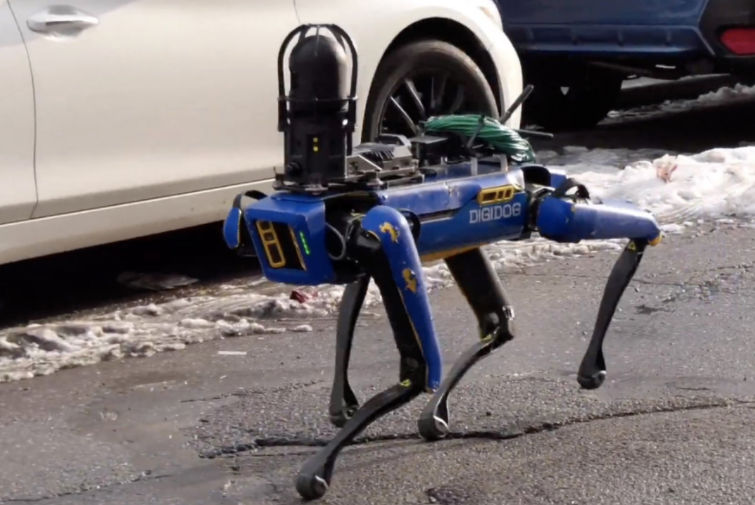 Read: Toronto Vaccinates Police Officers Before Those 80 Or Above

Read: No Charges In Police Shooting Of Black Man In Kansas City

“That thing is creepy,” a voice recorded on live footage shared by a local television network on YouTube said. The digidog, which cost the New York police an estimated $US74,500 ($A93,500) is assigned to counter emergency situations with a task to save lives, protect people, and protect officers, according to NYPD Technical Assistance Response Unit Inspector Frank Digiacomo’s statement to abc7ny. Spot uses the artificial intelligence AI to navigate and process very complex environments, NYPD TARU's Deepu John separately added.

NYPD’s Digidog is capable of two-way communication, meaning it can simultaneously connect the suspect and the police to have a conversation. It is the recent sighing on Bronx’s streets flashing lights and a large camera module as it sprints on 4 metal legs, at times mysteriously rotating camera at 360 degrees and zooming in on a subject without warning. The robot dog is designed to keep people “out of harm’s way”, NYPD explained to the local press reporters.

However, contrary to NYPD’s vision of its electronic police dog, Congresswoman Alexandria Ocasio-Cortez who represents Bronx and Queens condemned the use of the machine on Twitter, saying: “Shout out to everyone who fought against community advocates who demanded these resources go to investments like school counseling instead. Now robotic surveillance ground drones are being deployed for testing on low-income communities of color with under-resourced schools.”

WE RECOMMEND
Bobby Shmurda to be released on Feb 23, how long was he in prison? Find out
Miley Cyrus calls herself 'queen of photo dumping', shares number of old pictures
Golden Globes 2021: Watch the moment when Daniel Kaluuya won maiden Golden Globe Award
'Black Mirror' references and clues that hint towards a shared universe
NYC Mayor rides subway after stabbing attacks