Bin Laden's son has been killed as per the reports of White House on September 14. This is the wanted poster that was released by the US for Hamza Bin Laden

White House on September 14 confirmed that Osama Bin Laden's son Hamza bin Laden was killed in the backyard of Pakistan. In March, the US State Department's Rewards for Justice program had announced an award of up to $1 million for anyone providing information about Hamza. The poster, that was released six months before Hamza was killed, stated that his presence was confirmed with the release of audio and video messages that he had released on the internet, "calling out his followers to launch an attack on the United States and its Western allies". The US government further assured "absolute confidentiality" and "relocation" to anyone providing information about Hamza. 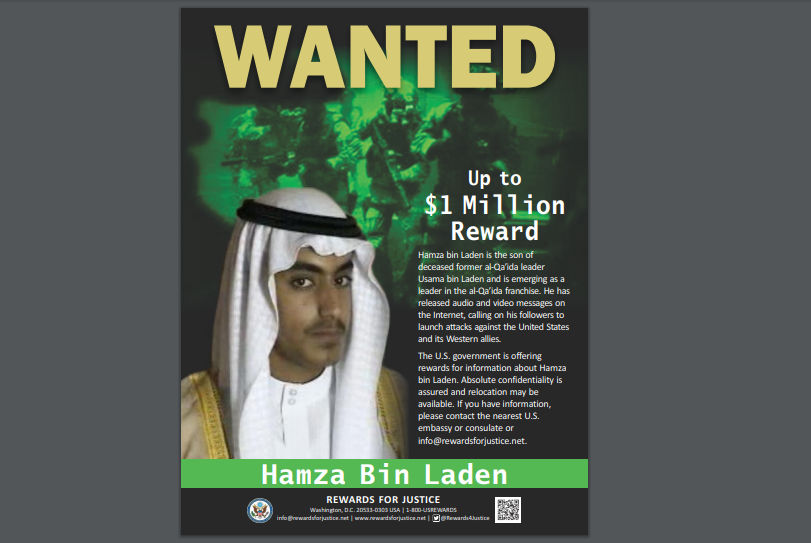 According to the statement released by the White House, Hamza was killed in a United States counterterrorism operation in the Afghanistan and Pakistan region. This loss of Hamza will end up depriving al-Qaeda of an important leader and a symbolic connection to his father. This counter attack killing will also slow down the important operational activities that were going on under the group, al-Qaeda. Hamza was also suspected to be the successor of the chief Ayman al-Zawahiri. There are no further details by the White House about the time and how Hamza was killed. He was already under the UN Security Council's global sanctions list, and the State Department had identified him as a “Specially Designated Global Terrorist”.

Hamza threatened attacks against the US

The son of a slain terrorist had threatened attacks against the US in revenge for the killing of his father, Osama Bin Laden in May 2011. Reportedly, Hamza was married to a daughter of Abdullah Ahmed Abdullah, an al-Qaeda senior leader. With citizenship of Saudi Arabia, Hamza was listed under the global sanctions list by the United Nations Security Council this year on February 21. Hamza's wedding was confirmed by a video found in Osama Bin Laden's compound and was released by the CIA in 2017. Evidence found from Osama's compound also revealed that Hamza was being groomed to be the next leader of al-Qaeda.

Read - 'Trump Is Confused, It Was Hafiz Saeed Who Asked Him To Mediate': This Pakistan Journalist Is Bashing Trump-Imran Khan's Nonsensical Meeting Left And Right