US Defence Secretary Austin spoke with Saudi Crown Prince Mohammed bin Salman and emphasized US commitment to helping the kingdom in defending its territory. 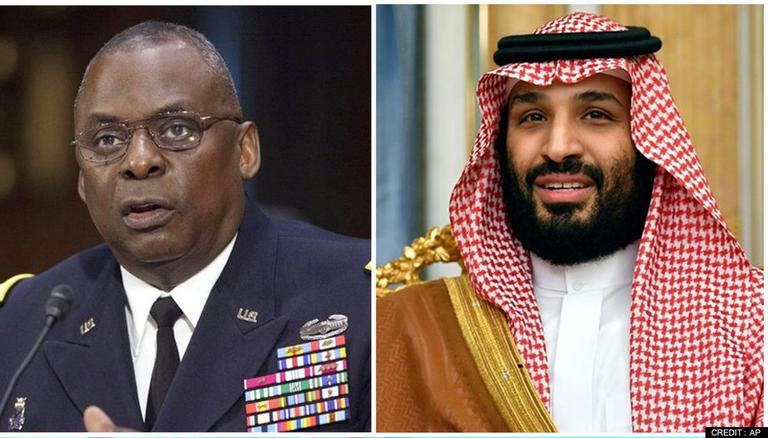 
United States Defence Secretary Llyod Austin on June 2 spoke with Saudi Crown Prince Mohammed bin Salman and emphasized America’s commitment to helping the kingdom in defending its territory and people. According to Pentagon Press Secretary John Kirby’s official statement, Pentagon chief and Saudi Arabia’s de facto ruler talked about regional security with a focus on ways to end the Yemen war. Austin also expressed gratitude to the Saudi Crown Prince for working in close collaboration and constructively with US Special Envoy Tim Lenderking to end the war in Yemen.

Apart from the Yemen war, Austin and the Saudi Crown Prince also noted the kingdom’s “recent successes in defeating Houthi attacks on the Kingdom and discussed ongoing bilateral efforts to improve Saudi Arabia's defences. Saudi Arabia is an important pillar in the regional security architecture and the U.S. remains committed to its self-defence.”.

Just last week, the Sudi-led coalition said that it destroyed an explosive-laden drone headed towards the city of Khamis Mushait launched by rebels in Yemen. Reportedly, Houthi military spokesperson Yahya Saree said in a tweet on Sunday that an operation had targetted King Khalid Air Base in Khamis Mushait with a drone that had recorded an accurate hit. Saree said that it was in response to “continued siege and aggression.”

The Iran-aligned Houthi rebels have reportedly captured the major region of northern Yemen since 2014 and the Saudi-led coalition intervened in 2015 as the militants ramped up the cross-border attacks in the kingdom. Reportedly, the Houthis are forcing an offensive to seize Yemen’s gas-rich Marib region. The Saudi-led coalition intervened in Yemen after the Houthis ousted a Saudi-backed government from the capital, Sanaa. Meanwhile, Houthis have said that they are tackling corruption and foreign aggression.

READ | Saudi Arabia imposes restrictions on use of loudspeakers in mosques, penalty for violators