PM Modi is currently in the USA, where he has taken part in important meetings with world leaders and global CEOs. He will also be addressing the 76th UNGA 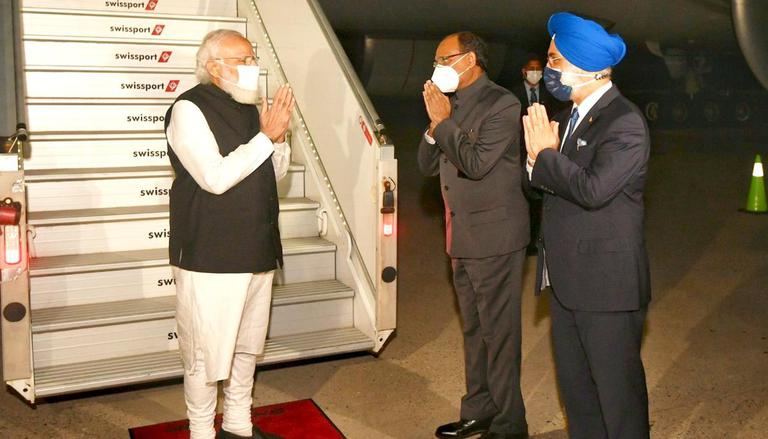 The Indian Ministry of External Affairs (MEA) tweeted informing the nation's "current membership of the UN Security Council lends even greater significance!" PM Modi will be speaking at the general debate of the 76th session of the UNGA at 6.30 pm today.

Informing about the Indian Prime Minister's arrival to New York, the MEA tweeted: "Voicing the sentiments of the 1.3 billion people of India!"

After reaching New York, PM Modi was seen greeting people both in and outside the hotel.

US: Prime Minister Narendra Modi greets people outside & at the hotel in New York pic.twitter.com/a91xAZUV21

PM Modi likely to talk on COVID-19, radicalisation at UNGA

The theme of this year's UNGA session is "Building Resilience through hope to recover from COVID-19, rebuild sustainably, respond to the needs of the planet, respect the rights of people, and revitalise the United Nations" and Prime Minister Modi is likely to deliver an address on India's fight against the pandemic.

India's permanent representative to United Nations TS Tirumurti had earlier asserted that PM Modi's speech at UNGA is “one of the most awaited among the world leaders.”

"He has always addressed some of the core issues confronting the world, and those of importance and concern to us in India, including some of our achievements on the domestic front,” Tirumurti told in an interview.

Meanwhile, two crucial meetings took place on Friday-- the first with US President Joe Biden and the second with leaders of the Quad countries. In his meeting with PM Modi, US President Joe Biden highlighted that the US-India relationship is bound to be stronger and said that from here on begins a new chapter in Indo-US ties.

READ | PM Modi in America: From UNGA to QUAD, diplomats talk about PM's agenda during US visit

"The PM and I'll be talking about COVID, climate change, Indo-Pacific," he said and added that COVID is the main focus for now. Thanking Biden for welcoming him and the delegation, Prime Minister Modi recollected their earlier conversations in 2014 and in 2016, during which the latter had laid out the vision for India-US bilateral relations.