Joe Biden and his wife, Jill, visited privately with family relatives of those killed in the suicide bombing near Hamid Karzai International Airport. 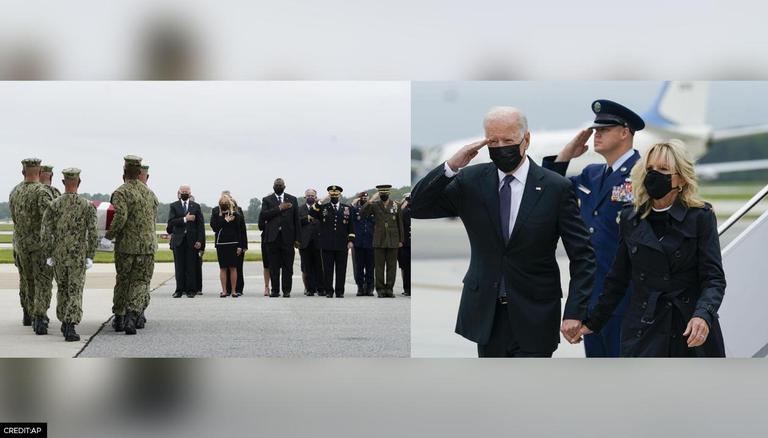 
President Joe Biden stood with grieving families in deep reverence Sunday, August 29, beneath a dark sky as the remains of 13 U.S. troops slain in the Kabul suicide bombing were removed with solemnity off a military plane that brought them home. During the mournful rite of the "dignified transfer," the only sounds audible were the calm commands of the honour guards in combat dress who carried the flag-draped cases, the hum of the C-17 aeroplane that had delivered the fallen, and the occasional sob of the bereaved.

US Prez pays respects to US troops killed in Afghanistan

Before the president became the fourth commander in chief in two decades of war to stand at attention at Dover Air Force Base as the remains of the fallen from Afghanistan returned home, Biden and his wife, Jill, met privately with family members of those killed in the suicide attack near Kabul airport.

The deceased varied in age from 20 to 31, and they were from California, Massachusetts, and other areas. Five were only 20 years old, having been born not long before the September 11, 2001, attacks that prompted the United States to invade Afghanistan in order to depose al-Qaida and remove its Taliban hosts who dominated the country.

They include a 20-year-old Marine from Wyoming who was expecting his first kid in three weeks and a 22-year-old Navy corpsman who told his mother in his last FaceTime session that he would be safe because "my guys got me."

At the time of their deaths, the 13 young service members were on the ground for the United States' final chapter in its longest war, assisting in a chaotic evacuation of Americans and Afghans who assisted in the war effort but are now fleeing the Taliban after their return to power.

"The 13 service members that we lost were heroes who made the ultimate sacrifice in service of our highest American ideals and while saving the lives of others," Biden said in a statement Saturday. "Their bravery and selflessness has enabled more than 117,000 people at risk to reach safety thus far."

As each transfer case was taken off the military plane and placed in an awaiting vehicle, Biden held his hand over his heart and appeared to close his eyes in prayer.

Family members of the fallen often go to Dover to witness the return of their loved ones' remains to American soil. The Dover Fisher House, which the Defense Department provides for families of the departed, was not large enough to accommodate all of the grieving families, according to military authorities, so some loved ones stayed off base.

Several key aides were there, including Defense Secretary Lloyd Austin, Chairman of the Joint Chiefs of Staff Gen. Mark Milley, and Secretary of State Antony Blinken. Eleven of the families of the fallen servicemen chose to allow media coverage of their transfers.