Rare Barreleye Fish That Can See Through Forehead Spotted By MBARI Researchers; Watch

A bizarre-looking fish identified as Barreleye was captured on camera by the researchers at a depth of nearly 2132 feet in the Monterey Submarine Canyon. 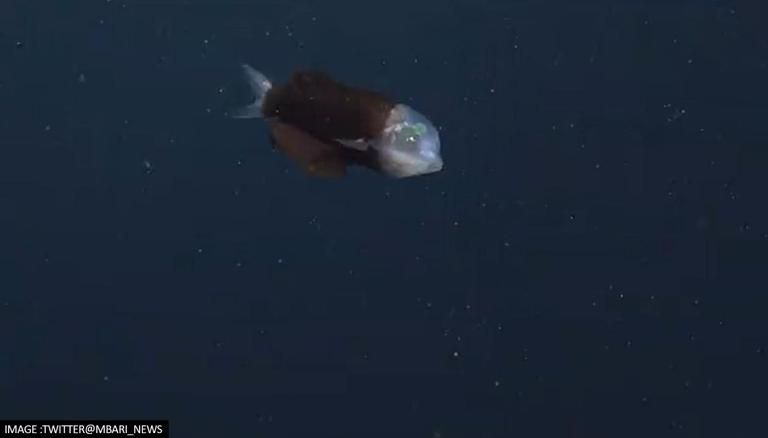 
A bizarre-looking fish was captured on camera by the researchers at a depth of nearly 2132 feet in the Monterey Submarine Canyon.

The fish with a bulbous, transparent head and green orb-like eyes that are present on its forehead is identified as Barreleye fish (Macropinna microstoma) and was spotted by remotely operated vehicle (ROV) of the Monterey Bay Aquarium Research Institute (MBARI), reported LiveScience. The video of the fish was released by MBARI on Twitter and it has captured the attention of social media users.

Barreleye fish spotted by a team of MBARI

The Monterey Bay Aquarium Research Institute(MBARI) in the tweet informed that the team of scientists spotted the fish when they were aboard MBARI’s R/V Rachel Carson with ROV Ventana to collect jellies for their upcoming exhibition. Thomas Knowles, a senior aquarist at the Monterey Bay Aquarium, in an email told Livescience that the fish first appeared small from a distance. Nevertheless, Knowles was able to identify the fish.

I spy with my barreleye, a new #FreshFromTheDeep!

During a dive with our education and outreach partner, the @MontereyAq, the team came across a rare treat: a barreleye fish (Macropinna microstoma). pic.twitter.com/XjYj04MOCt

The MBARI noted that in 5600 dives and more than 27,600 hours of video, the ROVs Ventana and Doc Ricketts have spotted the Barreleye fish only nine times. According to MBARI, the two small indentations where eyes normally appear on a fish are barreleye's olfactory organs called nares.

The MBARI researchers in 2009 showed that the fish, when eating, could rotate its eyes towards the front to see its food. The researchers believe that the Barreleye fish hovers below a siphonophore’s tentacles to steal food.

According to Monterey Bay Aquarium Research Institute (MBARI), Barreleye fish's habitat ranges from the Bering Sea to Japan and Baja California and has a diet of zooplankton including crustaceans and siphonophores. The fish lives at a depth of 600 to 800 metres (2,000–2,600 feet) and has a maximum size of 6 inches (15 centimetres).

The @MontereyAq team was aboard MBARI’s R/V Rachel Carson with our ROV Ventana to collect jellies and comb jellies for their upcoming #IntoTheDeep exhibition when they spotted this fascinating fish. The team stopped to marvel at Macropinna before it swam away. pic.twitter.com/xfv0HqlHrO

MBARI’s ROVs Ventana and Doc Ricketts have logged more than 5,600 dives and recorded more than 27,600 hours of video—yet we’ve only encountered this fish nine times! pic.twitter.com/WNdVLClEoj

Learn more about these deep-dwelling fish that can see through their own foreheads: https://t.co/T9Zcm4h9fg