SpaceX has ended it's second long-duration orbit mission for NASA as the Crew Dragon capsule landed safely on Earth from ISS late on November 8. 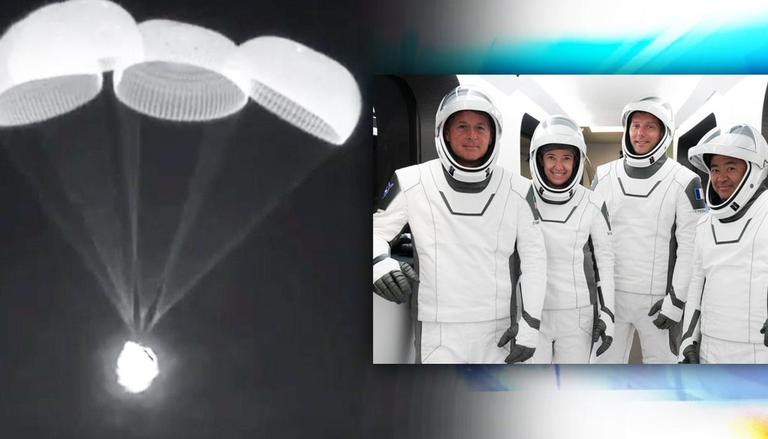 
SpaceX has ended its second long-duration orbit mission for the National Aeronautics and Space Administration (NASA) as the Crew Dragon capsule made a safe water landing after undocking from International Space Station (ISS) late on Monday November 8. The company's Crew Dragon Endeavour, carrying the astronaut quartet of SpaceX's Crew-2 mission made an eight hour trip back to Earth concluding its planned splashdown off the coast of Florida. This marked the end of the some 200 plus days mission undertaken by NASA astronauts Shane Kimbrough and Megan McArthur, European Space Agency astronaut Thomas Pesquet and Japan Aerospace Exploration Agency astronaut Akihiko Hoshide, SpaceX said in a statement.

The hatches between Endeavour and the station closed at 12:13 pm EST and the astronauts undocked on the planned time at 2:05 pm EST. "Their Dragon spacecraft conducted a series of short burns to back away from the space station. They'll splashdown in the Gulf of Mexico off the coast of Pensacola, Florida at 10:33 p.m," SpaceX said.

The @SpaceX Crew Dragon Endeavour has splashed down off the coast of Florida at 10:33pm ET (03:33 UTC), returning the Crew-2 astronauts back to Earth after more than six months aboard the @Space_Station: pic.twitter.com/yZkjL27Cd8

Crew-2 astronauts have donned their spacesuits ahead of Dragon's reentry into the Earth's atmosphere pic.twitter.com/1kKg2iH7ZA

For a recap, the arrival of the Crew-2, which was expected to be earlier on Sunday but was pushed to later on Monday only after NASA mission managers chose primary and backup sites following sufficient weather assessment. “Mission teams decided to adjust the Sunday, Nov. 7, undocking following a planned weather review showing high winds unfavourable for recovery near the splashdown zone in the Gulf of Mexico,” NASA had said in a blog post later on Sunday.

In a fresh new announcement following the Crew-2 return on Monday, SpaceX has kept its fingers crossed for the launch of Falcon 9 Rocket with Crew-3 members for the next long-duration mission. The rocket, carrying the Crew Dragon 'Endurance' spacecraft will have onboard four astronauts- NASA's Raja Chari, Tom Marshburn, Kayla Barron and ESA's Matthias Maurer for the rotational Crew-3 mission to the ISS. The decision came after the NASA weather assessment team declared that the conditions needed for propelling were "80% favourable."

If successful, it will be SpaceX's third long-duration mission in the orbit. The Crew-3 launch has been eclipsed by delays ever since it was rolled on the launch site on October 28. The last launch scheduled for October 31 was further pushed due to an undisclosed medical condition of one of the astronauts on the team.