More than a century after the iconic Statue of Liberty was formally unveiled at the New York harbour, its “little sister” has taken up residence in Washington 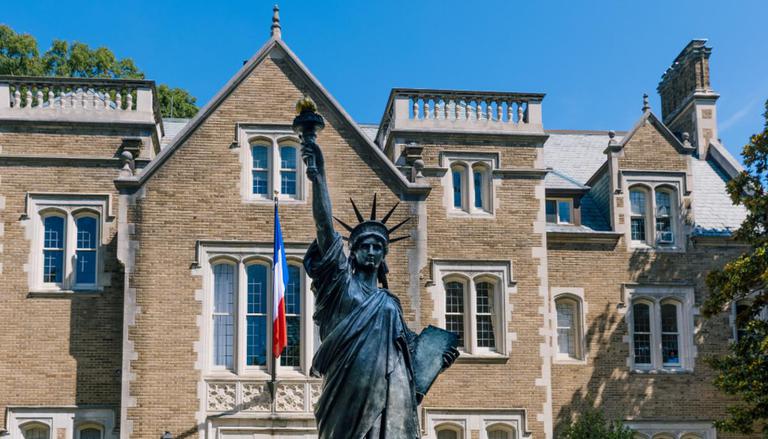 
More than a century after the iconic Statue of Liberty was formally unveiled at the New York harbour, its “little sister” has taken up residence in front of the French ambassador’s house in the US capital of Washington DC. The scaled-down replica of the bronze statue was given a ceremonial welcome in the US with Secretary of State Antony Blinken hailing it as a symbol of Franco-American unity. The ceremony, which coincided with France’s Bastille Day, also witnessed the presence of French Foreign minister Jean-Yves Le Drian who is currently on a diplomatic trip to America.

Today is #BastilleDay and we’re celebrating the arrival of Lady Liberty's "little sister" in Washington, DC, with some history from our holdings!

This 9-foot-high statue is one of the eight made from the original Bartholdi mold.

The ‘Little Sister’ is a scaled-down replica of the original bronze statue making it only 16th of the size of the Lady Liberty. According to Architectural Digest, the replica weighs 992 pounds and is just less than 10 feet tall. Another intriguing fact about the bronze version is that it is based on a plaster model designed in 1878 by French sculptor Frédéric Auguste Bartholdi, the same person who - with help from engineer Gustave Eiffel - created the larger version now in New York.

On the French National Day, #Liberty2021 has reached her US home at the French Residence. We can think of no better way to honor the past, present and future of 🇫🇷🇺🇸 friendship. All we can say is #ViveLaLiberty!#14juillet #BastilleDay pic.twitter.com/DVET2efcD2

At the inauguration ceremony, Blinken marked the French National Day hailing the country’s motto of ‘Liberté égalité, fraternité’. He said that while Liberté égalite can be commonly translated in English, there is no single word that describes ‘fraternité’.’ “But I think it's fair to say that fraternité is the word that best defines the relationship between our people and our ongoing struggle to improve our democracies and advance the ideals embodied in the light that shines the world, at home and around the world," he said. "So may she continue to remind us of the principles we share and the work that remains to live up to them. And may we never be cured of yearning for freedom."

With Little Sister, the Emmanuel Macron administration aims to deepen the bond with America. The first Statue of Liberty, which depicts the Roman goddess Libertas, was sent with the same intention years ago. The original statue resides on Liberty Island at the New York harbour, the replica would be placed on Elis island, which is located in the vicinity of Liberty island.