Texas Man Robs Bank To Pay For Wedding Ring, Turns Himself In

A Texas man has been robbed a bank to pay for a ring before his wedding day but later turned himself to police. The incident has happened in Groveton.

A Texas man who robbed a bank to pay for a ring before his wedding day later turned himself to police. The incident happened in Groveton, Texas. Netizens meanwhile are all praises for the police for their efforts in keeping the community safe.

As per reports, a day prior to his wedding, a Texas man apparently robbed a bank and later told authorities that he did it because he wanted to pay for the reception hall and his wife's ring. The bank robbery incident happened on October 4 morning in Groveton in the US State of Texas. The man, identified as Heath Bumpous, turned himself in late October 4 evening after his fiancée noticed that it was her to-be groom who was in the CCTV images which police posted on social media. Trinity Country  Sheriff Woody Wallace has announced the arrest of Heath Bumpous in a Facebook post.

Reports say that the wedding was scheduled for Saturday but it is not known if the wedding happened as planned. County sheriff said Bumpous has confessed to the bank robbery.

Netizens meanwhile are hailing the Sherrif and praising authorities.  A user commented “Wow!!! Good Job Officers. Thank God. No one was injured. “Thank you, Sheriff Wallace and all your people. Another job well done in Trinity County!” said another user. Another user said “Excellent job Sheriff, quick work on getting it out so it led to him turning himself in.”PSA: if you were going to his wedding, don’t go now. And you’re not invited to his arraignment proceedings” commented another user. Another user said “Great job! Thanks to Trinity & Houston County Officers!👍👏👏A job well.” “ I feel safe with our great 👍 police 👮‍♀️ officially in Trinity, ☺️” said another user. 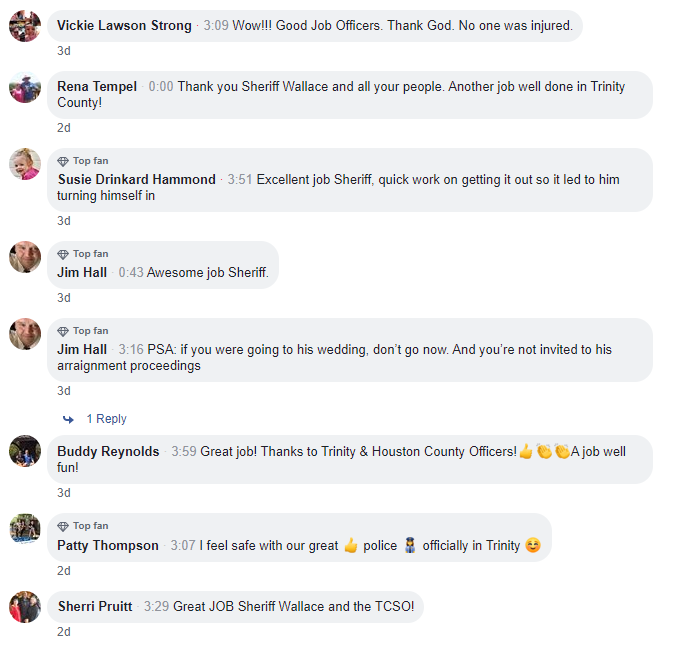