Amid the Coronavirus crisis, US President Donald Trump has lashed out at scientists twice in the last week for not liking their conclusions.

Amid the Coronavirus crisis, US President Donald Trump has lashed out at scientists twice in the last week after their findings did not agree with his conclusions. While Trump called one study as "Trump enemy statement, he called another study as 'A political hit job' without any evidence. The studies were by the National Institutes of Health (NIH) and Columbia University's Mailman School of Public Health.

Raising an alarm about the use of hydroxychloroquine, the National Institutes of Health (NIH) study stated there is higher overall mortality in coronavirus patients who took the drug while in Veterans Administration hospitals. To this, Trump, during his daily White House briefing on Tuesday said, "If you look at the one survey, the only bad survey, they were giving it to people that were in very bad shape. They were very old, almost dead." He further added that  "It was a Trump enemy statement."

Another study from Columbia University's Mailman School of Public Health stated that over 61 percent of COVID infections and around 55 percent of reported deaths could have been prevented if social distancing measures been put in place one week sooner. Speaking to the media on Thursday, Trump said, "Columbia's an institution that's very liberal. I think it's just a political hit job, you want to know the truth."

US House Speaker Nancy slammed the US President for lashing out at scientists. Taking to Twitter, she urged people to vote him out. 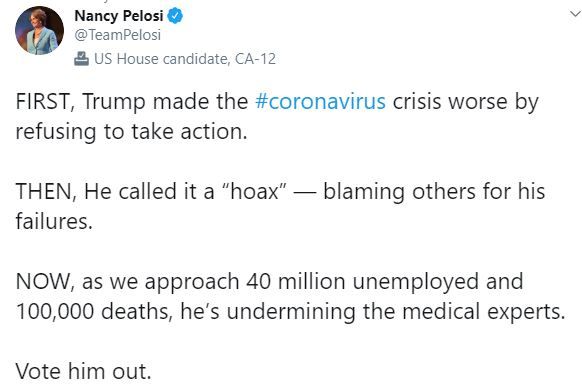 Meanwhile, US President Donald Trump on Thursday visited a Ford Motor Co plant in Michigan on Thursday in another maskless tour amid the COVID-19 pandemic. While speaking to the reporters, he claimed that he wore a face mask while touring the facility but removed it while talking to the press. The US President reportedly said that he removed it as he didn't want to be photographed and seen with a mask. The Ford plant in Michigan, a crucial state for the US President, has been mass-producing ventilators and personal protective equipment.

Coronavirus crisis in the US

Leading the number of worldwide cases of novel coronavirus COVID-19 infection, the United States is by far the country with the highest COVID numbers, surpassing China, Italy, and Iran. Currently, there are a total of 1,645,094 cases of Coronavirus with around 97,647 deaths. Meanwhile, New York --  one of the worst-hit spots in the US, has seen a total of 29,009 deaths and over 367,936 COVID-19 positive cases.

Read: Trump 'most corrupt US President'; accused of 'toxic fog of lies' by Republican strategist

PEOPLE HAVE PLEDGED SO FAR
LATEST NEWS
View all
6 hours ago
Police respond to large crowds, shooting on beach
3 hours ago
Protesters chant 'stop killing us' as trump passes
3 hours ago
Judge rules against florida on felons paying fines to vote
3 hours ago
Police in 3 states seek suspect in 2 connecticut slayings
2 hours ago
Trump says he has finished taking hydroxychloroquine as coronavirus therapy