Uighur Genocide A 'cultural Norm'? Biden Faces Backlash For Not Asking China To Own Up

US President Joe Biden now stands accused in certain sections of defending Chinese brutalities against Uighur Muslims. This came after his second call with Xi 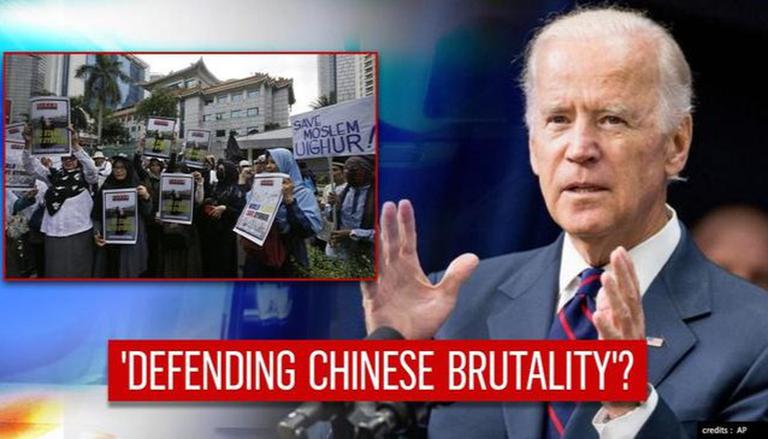 US President Joe Biden now stands accused in certain sections of defending Chinese brutalities against Uighur Muslims. On Wednesday, Biden responded to queries during a televised event on the Asian nation's handling of Muslim minorities in its far western region of Xinjiang. He called the failure of Xi Jinping to speak on the genocide of Uighur Muslims part of a “different norm”`.

After a long telephonic conversation with his Chinese counterpart, the U.S. President said that in the past China has been victimised by the outer world and Xi's principle is to keep the country 'unified' against this.

"Chinese leaders - and if you know anything about Chinese history - the time when China has been victimised by the outer world is when they haven't been unified at home. The central principle of Xi Jinping is that there must be a United techno-controlled China and he uses his rationals for the things he does based on that."

He added, "No American President can be sustained as a President if he doesn't reflect the values in the United States. So I am not going to speak out against what he is doing in Hong Kong, what he is doing with the Uighurs in the western mountains of China, Taiwan and One China policy by making it forceful, and he gets it. Culturally there are different norms in each country and their leaders are expected to follow", Biden said

After his address, he received backlash as some of the Twitter users accused him of defending brutalities against Uighur Muslims by not asking his counterpart to openly speak about them.

An Indian Women's Rights activist, Sonam Mahajan, took to Twitter, shared a video of US President speaking about China.

Here is the US President, Joe Biden defending Chinese brutalities against Uighur Muslims. The left has never cared a bit about the Chinese atrocities, not in India, not in America.pic.twitter.com/jpqVpu88L3

These are direct CCP propaganda lines

During the televised address, US President Biden did say that Chinese President Xi Jinping has drawn global criticism for holding the minority Uighurs in internment camps and other human rights abuses. "There will be repercussions for China and Xi knows that", he added, and also that the US will reassert its global role in speaking up for human rights and would work with the international community to get China to protect them.

Earlier this month, Secretary of State Antony Blinken also termed the Chinese government's treatment of Uighur Muslims a “genocide'. He tweeted that the US will hold Beijing accountable for its international abuses.

In my call with my counterpart in Beijing, Yang Jiechi, I made clear the U.S. will defend our national interests, stand up for our democratic values, and hold Beijing accountable for its abuses of the international system.

US President Joe Biden on Tuesday spoke with his Chinese counterpart Xi Jinping and discussed a range of issues, including the COVID-19 pandemic and climate change. As per the statement released by the White House, Biden in his conversation with Xi Jinping affirmed his priorities of protecting the American people's security, prosperity, health and way of life by preserving a free and open Indo-Pacific. The 2 leaders exchanged their views on combating the COVID-19 pandemic and also discussed the challenged of global health, security and preventing weapons proliferation. Notably, this is the second time both leaders have spoken in the last 7 days.

Strained ties of US & China

The international ties between the US and China had come under deep strain during Donald Trump's administration, as the two glocal powers sparred over a range of issues, including the trade war, COVID-19 outbreak, espionage allegations, media freedoms and human rights. The Coronavirus pandemic had become the main point of conflict between the 2 nations after Trump accused China of not being transparent during the initial stage of the pandemic in Wuhan in December 2019.

WE RECOMMEND
Joe Biden says decision on 2020 Tokyo Games 'has to be based on science'
Joe Biden speaks to Xi Jinping over Covid-19, climate change as pan-Pacific tensions rise
Joe Biden receives 'sweetest' gift from grandchildren on Presidents' Day, see pictures
US: Joe Biden connects with Indian restaurant owners to talk about their business
Joe Biden faces pressure to abolish federal death penalty in US: Report