The United States on Tuesday called for Russia to explain its recent military provocations and massive troop build-up on the Russian-Ukrainian border. US state department spokesperson Ned Price, at a press briefing, said that the US was ‘ready to engage’ if Moscow made efforts to intimidate Ukraine. “We are concerned by recent escalating Russian aggression in eastern Ukraine, including credible reports that have been emanating about Russian troop movements on Ukraine’s borders and occupied Crimea,” the former intelligence officer and the US Department of State spokesperson told reporters. “We’ve asked Russia for an explanation of these provocations,” Price told reporters. “But more importantly, what we have signaled with our Ukrainian partner is a message of reassurance,” he stated.

Price condemned Russia’s multiple ceasefire violations on the border with Ukraine that killed four Ukrainian soldiers last month on March 26  in military shelling in the conflict-prone Eastern Ukraine region. Two other Ukrainian army personnel were injured in the attack on the combat area of Zolote-4 in Luhansk Oblast, close to the cross-frontline entry point near the settlement of Shumy, north of the separatist stronghold of Donetsk. The skirmishes at the Russian Ukrainian border, since the start of the year, have claimed the lives of at least 24 Ukraininaoin military personnel in the war zone of Donbas, according to Ukraine’s defense ministry communique.

Ukrainian Foreign Minister Dmytro Kuleba condemned Moscow for a “systemic aggravation” of the security situation in Donbas and Crimea. Kremlin spokesman Dmitry Peskov played down military build-up, saying “this should not bother anyone and it poses no threat to anyone. Russia was taking measures to ensure the security of its own borders," TASS reported. 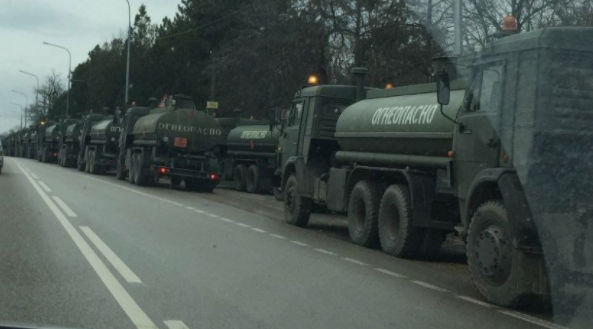 “Russia’s destabilizing actions undermine the de-escalation intentions achieved through the OSCE-brokered agreement of July of last year,”  Ned Price said, adding that the US was in a discussion about an increase in the military build-up, ceasefire violations and regional tensions with NATO allies. He added that US President Biden held a telephone call with President Zelenskyy of Ukraine, and the National Security Advisor Jake Sullivan spoke with the Head of the Presidential Office Andriy Yermak last week. He reassured that Secretary Blinken and Defense Secretary Austin were in contact with Defense Minister Andrii Taran,  Ukrainian Foreign Minister Kuleba, and  Ukrainian Foreign Minister Kuleba.

Earlier yesterday, a military expert in the region predicted that the Moscow-Ukraine conflict could spiral into a pan-European war ‘within four weeks'. Pavel Felgenhauer voiced concerns of a full-blown out war as footage of Russia’s recent military build-up circulated. Moscow deployed more than 4,000 troops close to the rebel stronghold Ukrainian border and annexed Crimea. Felgenhauer’s remarks followed Russia’s dire warnings to NATO that the country will take ‘military measures’  if NATO troops intervened in the tensions-stricken region's armed conflict. As the United States pledged ‘unwavering support’ to Ukraine, Russian fighter aircraft, helicopters, artillery, and army tanks amassed on the border. Europe was sent on 'high alert' due to a war-like scene on the Russia-Ukraine border.