Eric Adams, the new mayor of United States' (US) largest city, New York, took the train to City Hall on his first day on the job, hours after being sworn in. 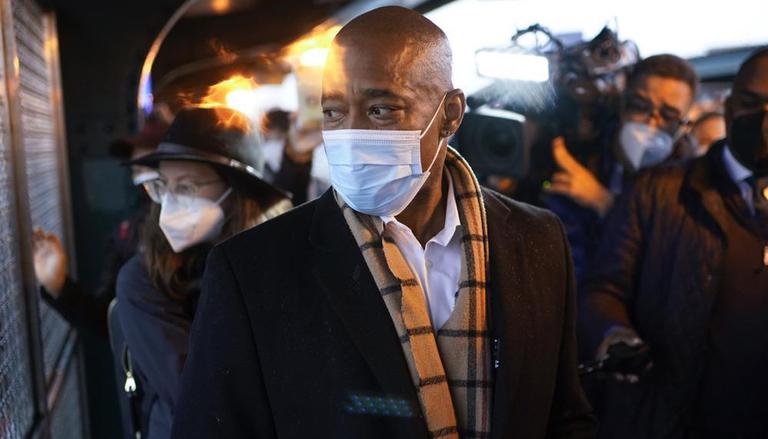 
Eric Adams, the new mayor of the United States' (US) largest city, New York, took the train to City Hall on his first day on the job, hours after being sworn in. AP reported, the former New York City police captain chatted with reporters and New Yorkers on the train on New Year's Day, and even called 911 to report a brawl after observing two guys fighting near the subway station.

Adams recited his oath of office as confetti continued to fall throughout Times Square. Adams was sworn in by Associate Justice Sylvia O. Hinds-Radix of the state Supreme Court's appellate division while holding a family Bible in one hand and a portrait of his mother, Dorothy, who died in 2020 in the other. Adams stood briefly on the main platform in Times Square on New Year's Eve, shortly before taking the oath, to emphasise the city's resiliency.

During his first 100 days in office, he gave his first mayoral address, promising to get things done. Adams, 61, confronted a huge task in dragging the city out of the pandemic, having taken office at a time when the city is dealing with a record number of COVID-19 cases caused by omicron. Adams walked from his Brooklyn brownstone to City Hall, accompanied by a mob of reporters, many hours later.

Adams spotted two men fighting on the sidewalk below the railway platform while waiting for his train, with a third man attempting to intervene. The new mayor contacted 911 to report. By the time two police patrol cars arrived, the fight was ended and two of the men had departed. Officers spoke with the remaining man but remained in their car, and Adams told reporters that if he had been the cop on the spot, he would have done further investigation.

Despite the lack of a formal shutdown, the city is experiencing de facto closures as a result of widespread COVID-19 infections. Several subway lines were suspended due to insufficient staffing, owing to positive test findings among transport personnel.  Adams and his aides are debating whether to increase vaccine regulations and are planning to distribute face masks and fast tests, as well as a colour-coded system that will notify New Yorkers to the current threat level.

READ | Watford Vs Tottenham Live Stream: How To Watch Premier League Match In India, US And UK?

AP reported, citing NYC mayor as saying, "Even in the midst of COVID, in the midst of everything that we’re going through, this is a country where hope and opportunities is always, ever present. It’s just great when New York shows the entire country of how we come back. We showed the entire globe what we’re made of. We’re unbelievable. This is an unbelievable city and, trust me, we’re ready for a major comeback because this is New York.”