In a blow to Biden's agenda, US Sen Manchin says he would not commit to supporting $1.75 trillion framework on social spending and climate change. 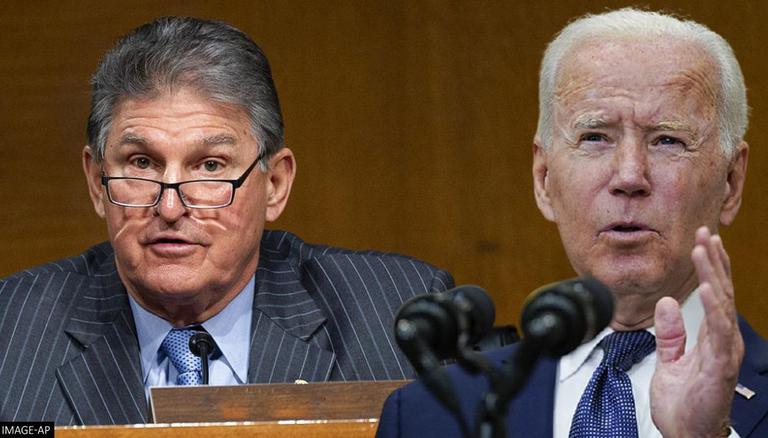 
In a heavy blow to US President Joe Biden’s domestic agenda, Democratic Senator Joe Manchin on Monday, 1 November, said that he would not commit to supporting a $1.75 trillion framework on social spending and climate change unveiled last week. While speaking at a news conference, Manchin said that the House Democrats should “stop playing games” with the bipartisan infrastructure bill and told progressive lawmakers in the lower chamber that “holding the bill hostage” won’t earn his support for the $1.75 trillion social spending package.

“While I've worked hard to find a path to compromise, it's obvious: Compromise is not good enough for a lot of my colleagues in Congress. It's all or nothing, and their position doesn't seem to change unless we agree to everything," Manchin told a news conference as per ABC News.

"Enough is enough. It's time our elected leaders in Washington, all of us, stopped playing games with the needs of the American people in holding a critical infrastructure bill hostage," he added.

Manchin stressed over his objections and suggested that it will take much longer to reach a deal on Biden’s “Build Back Better” package. He portrayed the bill as being filled with “shell games” and “budget gimmicks” that would end up costing far more than its $1.75 trillion price tag. He went on to even say that he is attempting to clarify “mischaracterisations" of his position that has been made since Biden met with House Democrats last Thursday.

Speaking at the news conference, Manchin further stated that he is continuing to work in good faith on finding a compromise reconciliation package but seemed to call out progressives on their lack of willingness to budge. He clearly stated that he would not be supporting a bill that is “this consequential without thoroughly understanding the impact it will have on our national debt, our economy and most importantly of the American people”. Manchin even went on to reiterate his concern about inflation, the insolvency of social safety net programs and the growing national debt.

In response to Manchin, Senate Majority Leader Chuck Schumer insisted that the officials are still talking and working through important details and making good progress. Separately, White House Press Secretary Jen Psaki issued a statement countering Manchin's concerns. She even stated that the Biden White House is "confident" the Democratic Senator will go along.

"Senator Manchin says he is prepared to support a Build Back Better plan that combats inflation, is fiscally responsible, and will create jobs," Psaki’s statement said.

"The plan the House is finalizing meets those tests -- it is fully paid for, will reduce the deficit, and brings down costs for health care, child care, elder care, and housing. Experts agree: Seventeen Nobel Prize-winning economists have said it will reduce inflation. As a result, we remain confident that the plan will gain Senator Manchin’s support,” it added.

It is to mention that Manchin’s defiance has further complicated Democrats' efforts to pass the bill. Manchin’s comments come just four days after US President Joe Biden unveiled the $1.75 trillion proposal that would offer free preschool for 3-and 4-year-old, expand home care for the elderly and offer tax credits for companies investing in clean energy sources. Notably, the package has already been slashed half the size of Biden's prior $3.5 trillion goal, after dropping some progressives' priorities, including key climate control provisions.