Biden will be holding a phone call with his Russian counterpart Vladimir Putin on Thursday in a bid to discuss a range of topics, administration official said. 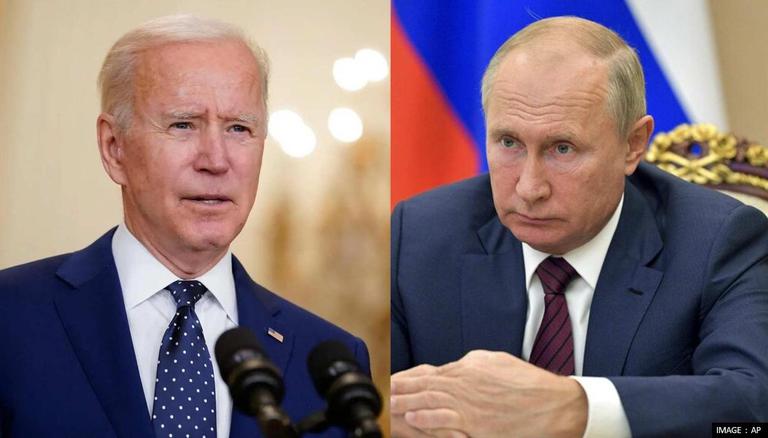 
US President Joe Biden will be holding a phone call with his Russian counterpart Vladimir Putin on Thursday in a bid to discuss a range of topics, a senior US administration official said. While citing the official, CNN reported that the telephone call was requested by Putin, Biden accepted because “he believes when it comes to Russia there is no substitute for direct-leader dialogues”. Now, during the call, the US President will make clear to Putin that there is a diplomatic path to de-escalate tensions in the region if only the Russian leader is interested in talking.

"This dialogue should and we expect will proceed on the basis of reciprocity," the administration official further added, as per CNN.

The official informed that Biden plans to preview the upcoming bilateral talks between Washington and Moscow set to take place on January 10. He will also be discussing the NATO-Russia and Organization for Security and Cooperation in Europe meetings slated for January 12 and 13. Biden will make it clear to Putin that the US will continue to coordinate closely with its allies and partners on all matters. “And we will proceed on the principle of noting about them without them,” the senior official added.

Separately, the US National Security Council spokesperson Emily Horne on Wednesday said, “The Biden Administration continues to engage in extensive diplomacy with our European Allies and partners, consulting and coordinating on a common approach in response to Russia's military build-up on the border with Ukraine. President Biden has spoken with leaders across Europe, and Biden Administration officials have engaged multilaterally with NATO, the EU, and the OSCE.”

Horne added that officials have even held consultations with the Bucharest Nine (B-9) group of Bulgaria, Czech Republic, Estonia, Hungary, Latvia, Lithuania, Poland, Romania and Slovakia. She went on to say that the US and its allies are committed to meaningful diplomacy with Russia. The United States is also prepared to respond with harsh, coordinated sanctions if Russia advances with a further invasion of Ukraine, she said.

US prepared to provide Ukraine 'with further assistance'

Further, Horne informed that the US has made plans to reinforce NATO’s force posture in Eastern Europe if Russia attacks Ukraine, adding that it is also prepared to provide Ukraine "with further assistance" in a bid to help the nation defend itself if necessary. She noted that Washington has not yet seen any effort by Moscow to lower tensions. In fact, she said that the US continues to see a significant Russian troop presence in and around the border of Ukraine.

Meanwhile, the phone call comes amid a time when the relations between the US and Russia have sunk to their lowest since the end of the Cold War. In recent months, the tensions between the two sides have also heightened especially as officials warned that Moscow is planning to invade Ukraine. Biden has repeatedly highlighted concerns of the US and its European allies about the increase in deployment of Russian forces surrounding Ukraine. Putin, on the other hand, has voiced rising vexation over Western military aid to Ukraine, a fellow former USSR that has tilted towards the West since a revolt toppled a pro-Russian president in 2014, and what it calls creeping NATO expansion.