US Vice-Presidential Debate: Harris Accuses Trump Of Taking Putin's Word Over US Intel

Harris attacked Pence by bringing in the 2016 US election meddling report, saying Trump took the word of Putin over that of the US intelligence community. 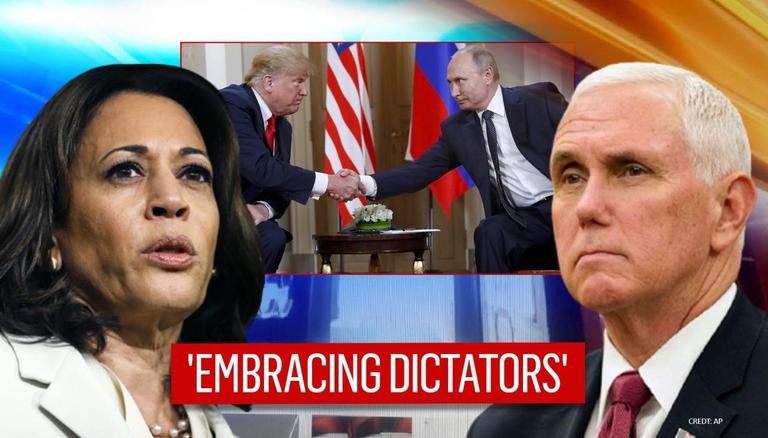 Democratic Party vice-presidential nominee Kamala Harris accused President Donald Trump of betraying Washington's allies and embracing dictators around the world, such as Russian President Vladimir Putin. During the only vice-presidential debate on October 8 (IST), Harris attacked her opponent Mike Pence by bringing in the 2016 US election meddling report, saying Trump took the word of Putin over that of the US intelligence community, who had claimed that the Kremlin interfered in the last presidential election and had helped the Republican leader's campaign.

Harris also slammed the Trump administration over the recent New York Times report on the Russian foreign intelligence unit offering bounties to terrorists for killing American soldiers. She said that Trump "does not care" about Russian bounties reports, which is why he failed to confront his counterpart, Vladimir Putin. Harris also brought in the "losers" and "s***ers" remark that Trump allegedly passed against fallen American soldiers in Paris in 2018. She said that Trump only cares about his own personal interests be it at expense of American soldiers or people.

The debate between Mike Pence and Kamala Harris took place in Salt Lake City, Utah, where the two candidates locked horns for 90 minutes with a glass partition between them. Harris and Pence traded barbs on several issues, including racial inequalities, Supreme Court appointments, Russian meddling in the US election, tax cuts, COVID-19 vaccination programme, among other things. The moderator of the debate, USA Today journalist Susan Page also touched on various issues such as US-China relations, the inability of Trump and Biden to work due to their age, COVID-19 vaccination, etc.

The recent debate saw another important page taken out of the US election calendar, which officially began with both parties holding their national convention and nominating candidates for the upcoming poll. The next important date to mark is October 15, when Trump and Biden are scheduled to face-off for the second presidential debate. However, Biden has said that he would not debate Trump because of the latter recently testing positive for COVID-19.