Both the CVoter and Jan Ki Baat exit polls predict that NDA will emerge victorious in Bihar. While Jan Ki Baat projects that the BJP, JD(U), LJP alliance will win between 28 and 21 seats in the state (11,15 and 4 seats projected for BJP, JD(U) and LJP respectively), CVoter projects 33 as the number that will go in NDA's favour in the state. 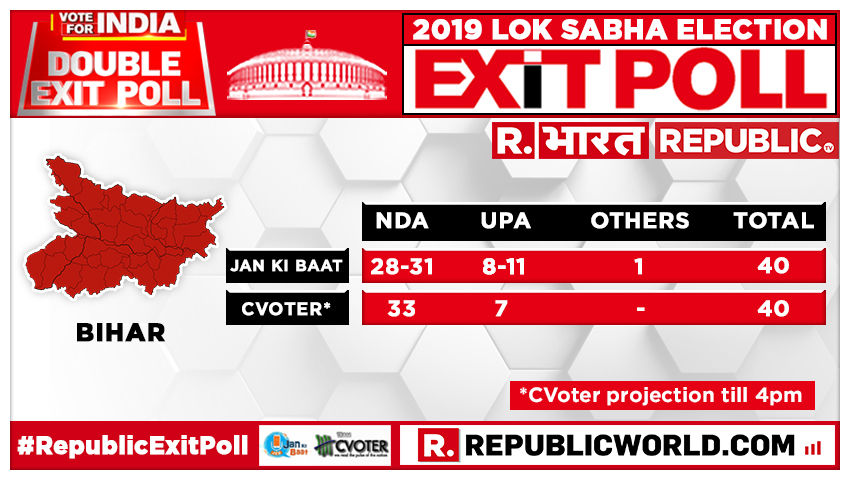 Both the CVoter and Jan Ki Baat exit polls predict that NDA will emerge victorious in the state. While Jan Ki Baat projects that the BJP, JD(U), LJP alliance will win between 28 and 21 seats in the state (11,15 and 4 seats projected for BJP, JD(U) and LJP respectively), CVoter projects 33 as the number that will go in NDA's favour in the state.

One state that has given varied results in the recent past. In 2014 elections, BJP won 22 of 40 seats in the state, in assembly polls when its ally JD(U) joined the Mahagathbandhan with the RJD, BJP was reduced being the third-largest party. However, JD(U) and BJP are contesting the 2019 election together against the Mahagathbandhan comprising of Congress, RJD and others. Chief Minister of the state Nitish Kumar broke the alliance with the Mahagathbandhan in 2017 following allegations of corruption on his deputy Cheif Minister and RJD supremo Lalu Yadav's son Tejashwi Yadav. After which Nitish Kumar joined the NDA again only to lose leaders like Sharad Yadav from his party. The likes of Sharad Yadav, former Chief Minister of Bihar Jitan Ram Manjhi, Lalu Yadav's Rashtriya Janta Dal and Congress formed a grand alliance or Mahagtahbandhan in the state. Other smaller parties like Mukesh Sahni's Vikasheel Insan Party are also the part of the Mahagathbandhan. The contest in the state is directly between the Mahagathbandhan and the NDA comprising of JD(U) and BJP.

While Nitish is seen as 'susashan babu' (development man) in the state, Tejashwi Yadav said to be the face of Mahagathbandhan, has campaigned extensively on the corruption allegations on Nitish Kumar and his current deputy Sushil Kumar Modi. 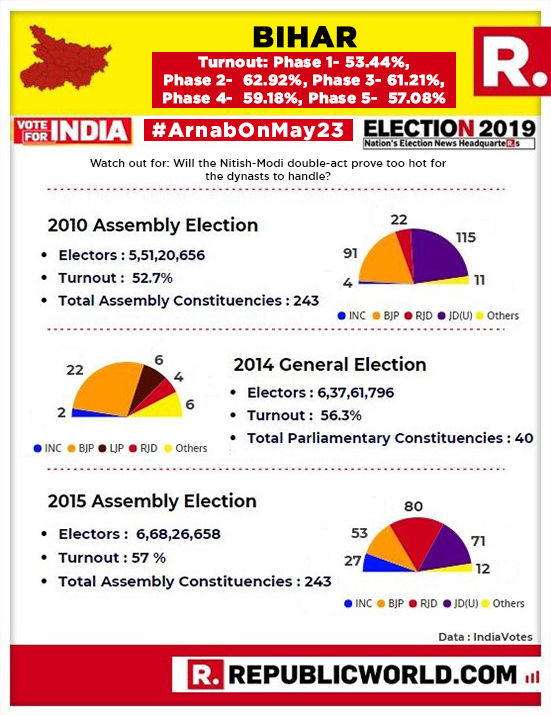 These are the key contest in the state: