Even as the counting for the Delhi elections is underway with the BJP and AAP at a neck-to-neck contest, Subhash Chopra takes full responsibility

Even as the counting for the Delhi elections is underway on Tuesday with the BJP and AAP at a neck-to-neck contest, Delhi Congress chief Subhash Chopra said that he is taking full responsibility for his party's defeat. Speaking to Republic TV, Chopra said that he does not consider AAP as a party, and stated that its BJP's B team.

He said: "I am accepting the public mandate. I am taking responsibility for it. There must be some lack in therefore results are coming in this way. We work for the Public and we will keep working for them. Winning and losing is a part of elections. But I am taking moral responsibility. But BJP should clarify what about goli marenge statement. I don't consider AAP a party - its BJP's B team. We have worked hard."

#Feb11WithArnab | I accept people's mandate, I am disheartened but I take moral responsibility. We have to introspect: Subhash Chopra, Congress https://t.co/rGQJsiKgt2 pic.twitter.com/eQIFX94hRE

As per EC's official update, counting for 68 seats is done and the ruling Aam Aadmi Party is leading on 50 seats and BJP on 18 seats. The AAP in 2015 registered a landslide victory by winning 67 out of the 70 seats and Congres drew blank, with BJP bagging 3 seats. As per the Republic-Jan Ki Baat Exit Polls prediction 48-61 seats for the AAP,  9-21 seats for the BJP and 0-1 for Congress. 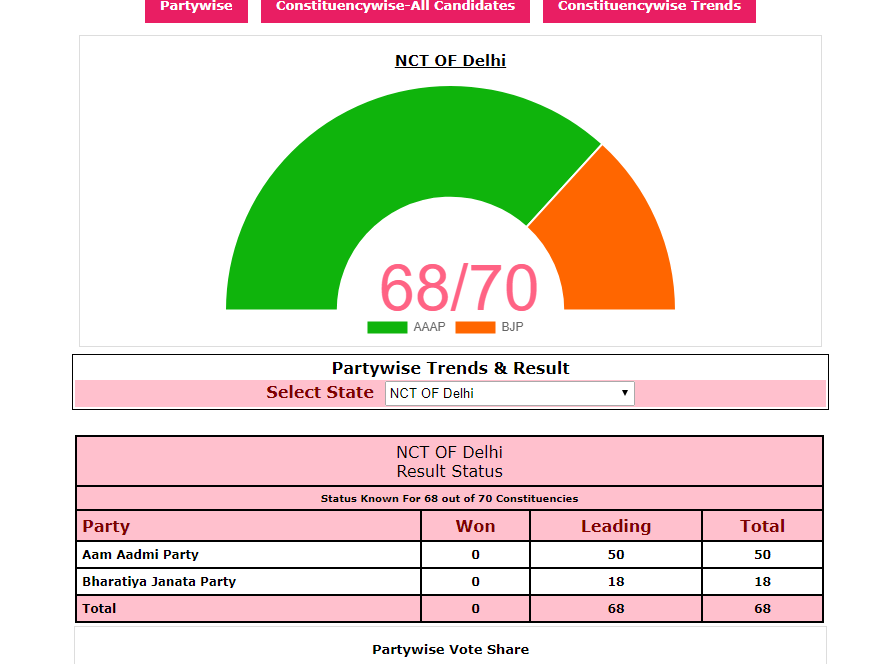