83: Suniel Shetty Reviews Ranveer Singh-starrer, Says 'There Was Only Kapil Dev On Screen'

Actor Suniel Shetty recently showered Ranveer Singh with praises after attending the screening of the upcoming sports drama '83' in Mumbai. 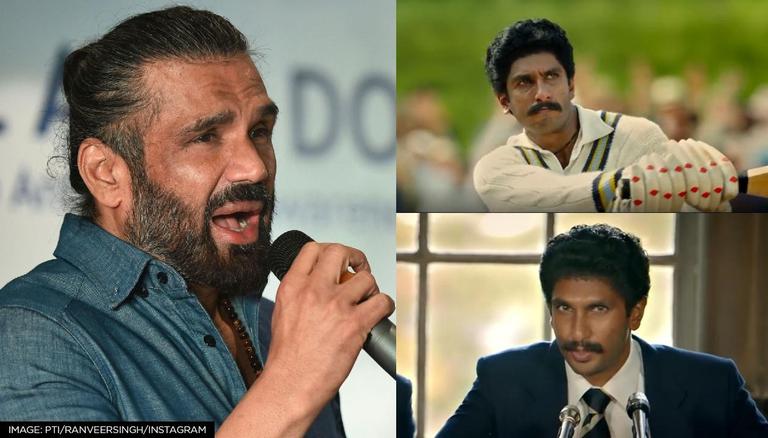 
Ranveer Singh and Deepika Padukone starrer 83 is set to hit the theatre screens in three days and make the entire country relive the glorious moment from Indian cricket's history. The Kabir Khan directorial is based on the true story of the Indian Cricket Team's 1983 World Cup win under the captaincy of Kapil Dev. While Ranveer is set to portray Kapil Dev and Deepika will essay his better half, here is what Suniel Shetty has to say about their work.

Suniel Shetty recently attended the film's Mumbai screening and was stunned by Ranveer Singh's transformation to Kapil Dev. The actor took to his Twitter handle and showered praises on the Bajirao Mastaani star. In his review, he wrote, "Went to watch @RanveerOfficial in 83." The actor further asserted he could not spot Ranveer Singh and saw only Kapil Dev in the entire movie. He wrote, "Couldn’t spot him. There was only Kapil Dev on screen. Incredible transformation. I am stunned beyond." As per the Marakkar star, the film was a rollercoaster ride of emotions. Reacting to the movie, the actor penned, "A team cast that could’ve walked off Lords. Got gooseflesh like I was reliving ‘83. Still shaken & teary-eyed at the artistry & emotions."

Continuing the Twitter thread, Suniel Shetty showered the film's director Kabir Khan with praises. He wrote, "Sheer belief. That’s what it is. The goodness of being @kabirkhankk." "The faith in his story & the power of his scenes & characters. Blew my socks off. And the backing of Sajid Nadiadwala @WardaNadiadwala in a project that’s a personal tale. The tears are real," he added. The actor surely fueled excitement among fans who are waiting for the film's release.

READ | Ranveer Singh in talks with Kabir Khan for another film after '83'? Here's all about it

Went to watch @RanveerOfficial in #83. Couldn’t spot him. There was only #KapilDev on screen. Incredible transformation. I am stunned beyond. A team cast that could’ve walked off Lords. Got gooseflesh like I was reliving ‘83. Still shaken & teary-eyed at the artistry & emotions. pic.twitter.com/IW8zGYNsyc