Adnan Sami enjoyed a 'food fusion' of Indian and international cuisines to say, 'YOLO.' While some netizens were envious, he had quirky replies for them.

The Adnan Sami of today is not what most of us would recall as the initial memories of the singer-music composer. The music videos of Lift Kara De or Tera Chehra, in which a lot of us might have seen him for the first time, featured him almost three times the size he is today. Adnan left the world in shock when he shed, reportedly over 150 kilos some years ago. However, it doesn’t seem that he is on a very intense diet after so many years, since he is very much a foodie even today. The Bheegi Bheegi Raaton Mein singer recently enjoyed a unique combination of dishes, of sushi and Samosa Chaat that sent his fans into a mouth-watering excitement. Adnan even pulled the leg of the some foodies who were envying him, and gave some quirky answers too.

Adnan on Sunday shared a photograph on Twitter of the meal that he was relishing. The luscious spread included the ‘desi’ Samasa Chaat, and two types of sushi, California Rolls and Nigiri Sushi. It was truly a YOLO( You live only once) moment for him since he captioned it, “What a combination... Californian Rolls, Nigiri Sushi & Samosa Chaat!!#FoodFusion #YOLO .” 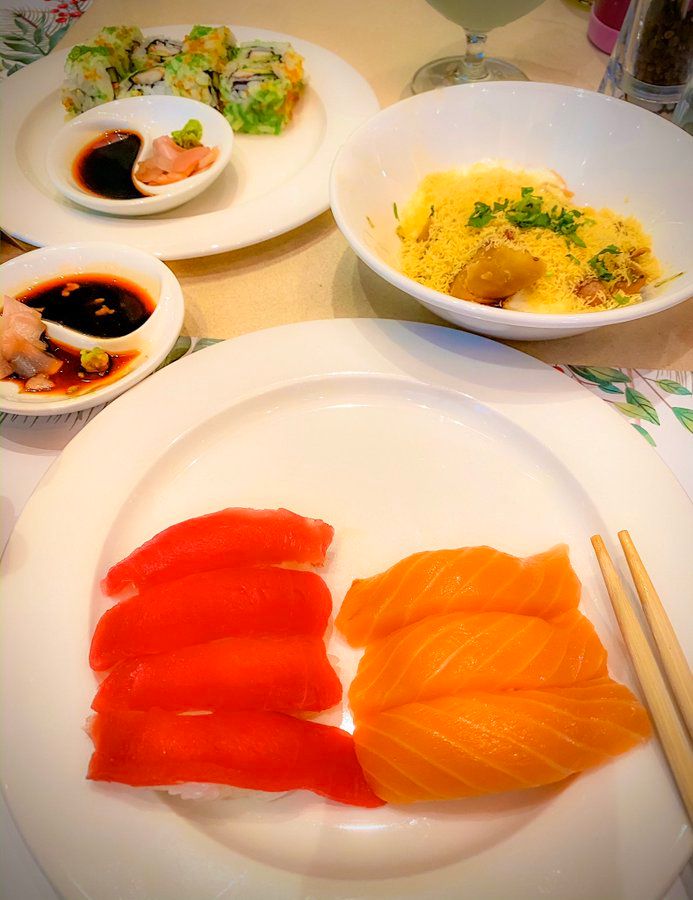 Netizens were impressed. One of them wrote, “Sir, you are making foodies cry.” Adnan ‘added  salt to his wound’ as he wrote, “Go ahead and weep!!” Another user asked, “Adnan sir ye orange wali fish hain kya?” he quippd back, "Khaanay waali!” One was curious to know what the ingredients of California Rolls were. Adnan then responded, “Usmay california hota hai!”

What’s Adnan up to?

Adnan Sami keeps making headlines for his Twitter posts. The ones involving his replies to Pakistan trolls are those that his fans enjoy the most. Those with daughter Medina come a close second. On the professional front, Adnan Sami had turned an actor with Afghan last year. On the music front, his Qawwali Bhar Do Jholi from Salman Khan-starrer Bajrangi Bhaijaan is among his most popular works in recent times. He had recently expressed his pride on spotting a video of a police officer performing the song. He had then tweeted, “Fantastic !!#BhardoJholi #BajrangiBhaijan.”