On Thursday morning, Alia Bhatt and Ranbir Kapoor went to check the progress of the under-construction Krishna Raj bungalow, along with Neetu Kapoor. 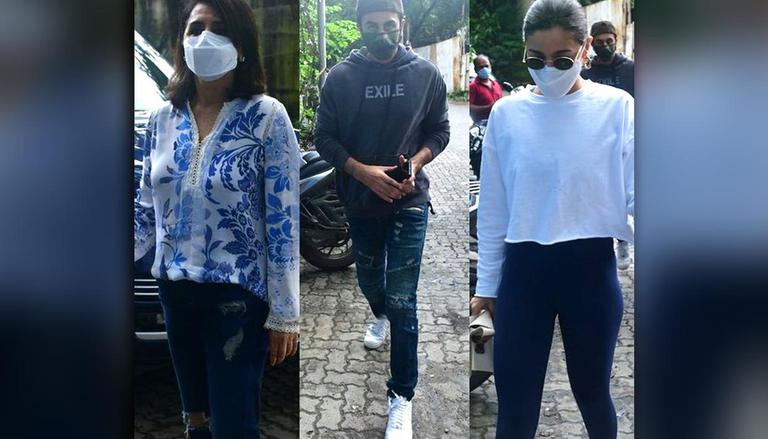 
Alia Bhatt and Ranbir Kapoor were recently vacationing in Jodhpur, Rajasthan. The couple went there to celebrate Ranbir Kapoor's 39th birthday. They returned to Mumbai on Wednesday, September 29, 2021. A day after, the couple went to check the progress of the under-construction Krishna Raj bungalow, along with Neetu Kapoor.

The trio paid a visit to the construction site on Thursday morning, September 30, 2021. Paparazzi Varinder Chawla shared glimpses of their visit via Instagram. In one of the videos, Alia Bhatt and Neetu Kapoor were seen indulged in a serious discussion about the house. Seemingly, Alia Bhatt was talking about the house with a man standing on her side.

The Student Of The Year actor donned a white top, blue bottoms and white shoes, and accessories her look with a sling bag. She was twinning with Ranbir Kapoor's mother, Neetu Kapoor, as the veteran actor fashioned a comfy blue and white printed top with a pair of blue jeans. The two also wore matching white masks. Alia Bhatt tied her hair in a bun while Neetu Kapoor left her hair open. Neetu Kapoor also held an umbrella due to mild showers. Ranbir Kapoor also kept it casual with a grey hoodie, blue jeans and a cap.

Alia Bhatt and Ranbir Kapoor jetted off to Jodhpur for the Sanju actor's 39th birthday. Taking to Instagram, Alia Bhatt gave a glimpse into their Jodhpur vacation and wished Ranbir a happy birthday. She shared a photo of the two sitting on the bank of a river and looking at the setting sun. In the picture, the couple was sitting on a mat with two pillows. Alia sported a white tank top, while Ranbir wore a grey t-shirt and cap. In the caption, Alia wrote, "happy birthday my life." Several Bollywood celebrities gushed over the couple's adorable photo. Anushka Sharma, Riddhima Kapoor, Neetu Kapoor and others reacted with heart emoticons.

READ | Ranbir Kapoor holds Alia Bhatt protectively as they make their way to the airport; Watch

Meanwhile, both Alia Bhatt and Ranbir Kapoor are gearing up for the release of their respective films. Alia Bhatt's Gangubai Kathiawadi recently locked January 6, 2022, as its release date. On the other hand, Ranbir Kapoor's Shamshera would hit the theatres on March 18, 2022.