Alia Bhatt and Akansha Ranjan Kapoor share a deep bond, the actor often posts pictures with her friend as they often travel together

Alia Bhatt has been spending her 'Christmas eve' eve with her best friend Akansha Ranjan Kapoor and shared the Instagram story update of her friend. The actor's latest story update features an extremely festive and cute photo of the duo dressed in pajamas and posing next to a decorated Christmas tree with a smile on their faces. The childhood friends seem to be prepping for the big festival with gifts and wrapping paper spread about them.

Take a look at their photo: 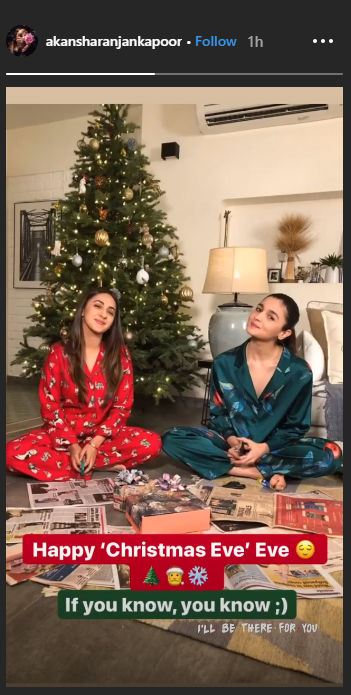 Read | Alia Bhatt-Akansha Ranjan were pulled over by cops once, the duo reveals as they take ‘Best Friend Test’

Akansha captioned the photo with a phrase as a sweet wish for the day and she has also added a hint for the source of the phrase. The words "'Christmas Eve' eve" had been first made popular by the quirky and funny character Phoebe Buffay in the iconic American TV show Friends in one of the Christmas themed episodes. Alia Bhatt and Akansha Ranjan Kapoor share a very close friendship and the latter has often been a part of the former's social media updates.

Akansha is the daughter of Shashi and Anu Ranjan, the former an actor and the latter an entrepreneur and film producer. Her sister Anushka Ranjan made her debut with ‘Wedding Pulav’. The rumors about Akansha’s impending film debut also doing the rounds.

Alia Bhatt has been in the news lately for her upcoming film Brahmastra which is directed by the Wake Up Sid fame director Ayan Mukerji. The actor will feature in the film along with beau Ranbir Kapoor and megastar Amitabh Bachchan along with actors Akkineni Nagarjuna and Mouni Roy in pivotal roles.

Alia was spotted at Varanasi earlier last week filming a dance number for Brahmastra along with Ranbir Kapoor. The film is likely to release towards the end of the year 2020 as it is scheduled for intensive post-production work in the upcoming year.

What's next for Alia Bhatt?

Alia Bhatt is also gearing up to start filming for her father Mahesh Bhatt's next directorial venture Sadak 2 which is the sequel to his 1991 film Sadak. The film is set to feature actors like Sanjay Dutt, Aditya Roy Kapoor and Pooja Bhatt along with Alia Bhatt and is scheduled to release on July 10, 2020. In the upcoming year, the Brahmastra actor will also be seen in director SS Rajamouli's Telugu film RRR along with  NT Rama Rao Jr, Ram Charan, and Ajay Devgn.

Read | Alia Bhatt: Take a look at Alia's journey from Shanaya to Safeena