Amitabh Bachchan Reminisces About His Days On The Sets Of 'Don', Shares Throwback Posters

Taking to his Instagram handle, Amitabh Bachchan recently shared two posters from his epic film Don and mentioned how a still became a poster of the movie. 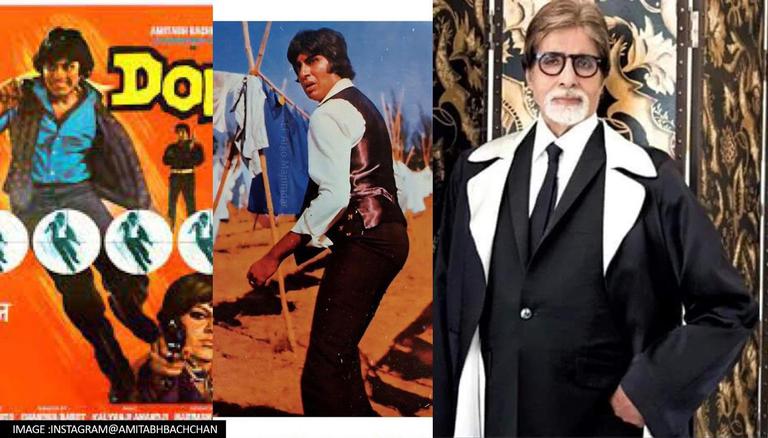 
Legendary veteran actor Amitabh Bachchan has won millions of hearts throughout his career with his ace acting skills and how he brings his characters to life. However, some of the actor's evergreen films are so iconic that they are still reminisced about and his fans enjoy watching them. While the actor is an active social media user and often shares his thoughts with his fans via Instagram, he recently recalled his days on the sets of his 1978's blockbuster film Don.

Taking to his Instagram handle, Amitabh Bachchan recently shared two posters from his epic film Don. The half-and-half collage had a poster of the film featuring a running sequence. Amitabh wore a blue shirt underneath a checked pantsuit. The second photo had him in a brown coloured formal outfit. Sharing the collage, the actor mentioned how a picture that was taken before the running sequence for the film ended up becoming the movie's poster. He wrote, " just before shooting the run in DON that became the poster."

Amitabh Bachchan recently shared pictures with his Deewar co-star Shashi Kapoor. Taking to his Insatgram handle, Amitabh Bachchan shared two throwback pictures with Shashi Kapoor while remembering the late star. The pictures were from their films together and managed to perfectly capture the actor's calibre and bond at the same time. The 79-year-old star got nostalgic as he captioned the post, "zamaane bit gaye. Naa Jaane kitni filmein ki saath me." (Time have passed. I wonder how many films we did together.) Actor Rohit Bose Roy, who is a fan of Big B, commented on the post and wrote, "Best pair ever!!! Chalk and cheese, perfect foils!"

Amitabh Bachchan has a long list of films lined up in his kitty. The actor is currently gearing up for the release of his film Runway 34, co-starring Ajay Devgn. He will also star alongside Alia Bhatt and Ranbir Kapoor in the much-anticipated film Brahmastra. The movie is scheduled to release on September 9, 2022. Apart from these, the actor has Jhund, Goodbye, Uunchai and Project K in the pipeline. He will also star in the official Hindi remake of The Intern alongside Deepika Padukone.