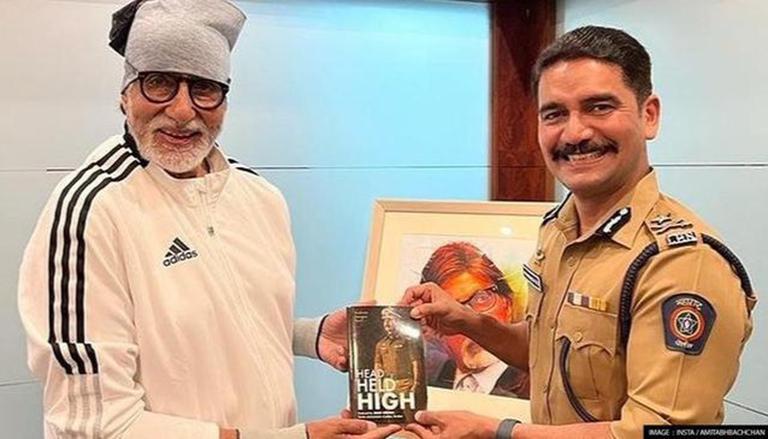 
Veteran Bollywood actor Amitabh Bachchan enjoys a massive fandom across the world. The actor, who is working rigorously even in his late 70s, is an inspiration to many. Despite his busy schedule, Amitabh Bachchan is also an avid social media user and often shares glimpses of his daily life online. Bachchan recently shared a picture where he can be seen all smiling with IPS Officer Vishwas Nangre Patil, Joint Commissioner of Police, Mumbai City, as he unveiled the latter's latest book.

Taking to his Instagram handle, Amitabh Bachchan recently shared a picture of him receiving a book penned by Vishwas Nangre Patil. The Mumbai Joint Police Commissioner recently launched his book Head Held High which is set in the backdrop of events from the 26/11 attacks in 2008. In the photo, Vishwas Patil could be seen gifting a copy of his book to Big B while sharing smiles with him for a picture.

Sharing the photo, Amitabh Bachchan penned words of praise for the police officer and mentioned how he is a gentleman and a fierce policeman. Taking to Instagram, Big B wrote, "An Officer and a Gentleman .. but .. When duty calls a fierce policeman to fight and defend the City .. 26/11 .. 'Head Held High' by Vishwas Nangre Patil ..Keeping moto of the Police alive & pertinent! 'Sadrakṣaṇāya Khalanigrahaṇāya,' 'To protect Good and to destroy Evil,' he added.

Resharing the same photo, Vishwas Patil also thanked Big B for his blessings. He wrote, "Thank you sir for your kind words and blessings! Forever grateful."

Vishwas Nangre Patil served as the Deputy Commissioner of police in South Mumbai zone-1 during the 2008 Mumbai terror attack. The officer led the tea at the Taj Hotel, which was under attack on November 26, and also shot one of the terrorists. In 2015, Patil was conferred with President's Police Medal for his duty and bravery. He is currently a role model for thousands and often makes headlines for his love for marathons. As per Hindustan Times, Akshay Kumar also sought inspiration from Vishwas Nangre Patil to play a fierce cop in Sooryavanshi.