Taking to Instagram, Anupam Kher recently penned a sweet birthday one for the iconic Hollywood actor Robert DeNiro with stunning photos of them together. 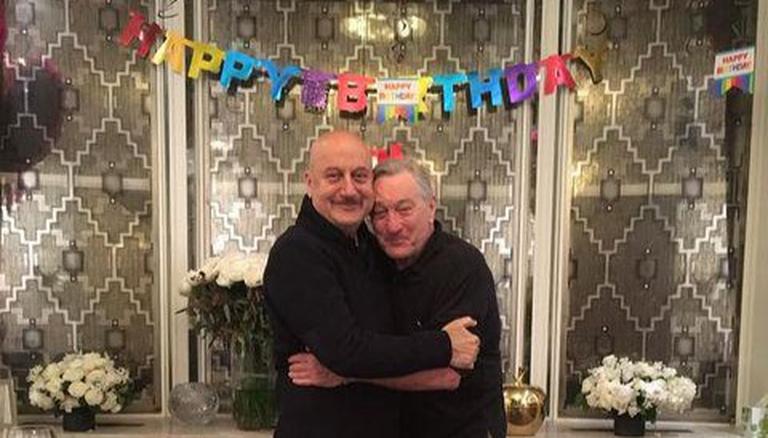 
Anupam Kher and Robert DeNiro share a beautiful bond together and Kher’s Instagram posts are proof of it. The actor never misses to unveil the memorable moments he spent with Robert DeNiro and as the latter celebrated his birthday recently, Anupam Kher was among the first ones to wish him a happy birthday.

Anupam Kher recently took to his official Instagram handle and shared a series of photos in which he can be seen posing for the camera with Robert DeNiro. In the first one, they both can be seen hugging each other from the side with a happy birthday note in the background. In the next one, they both were seen pointing their fingers towards each other. In the last one, the duo was twinning in blue with gleeful smiles on their faces.

In the caption, he penned a birthday note for the actor while referring to him as his best friend and the world’s best actor. He further stated how it’s an honour and pleasure to know him while hoping for him to continue to inspire actors all over the world. The caption read, “Happy Birthday my dearest friend and world’s Best Actor #RobertDeNiro! It has been my pleasure and my honour to know you. May God give you all the happiness in the world. May you continue to inspire actors all over the world. Love and prayers always!” (sic)

On the other hand, Anupam Kher earlier wished the Bollywood filmmaker David Dhawan on his birthday while sharing a bunch of photos from the latter’s birthday bash. The photos also depicted that many other notable Bollywood actors attended the director’s birthday bash including Shakti Kapoor, Chunky Panday, Rajpal Yadav and others. In the caption, Anupam Kher penned a note revealing how they all were together at David Dhawan’s birthday bash and added how they all have spent some morale time in the past. While signing off, he hailed that they all were the best with the hashtag ‘Friends.’