"Kangana just called she told me Ahmad Khan called her and apologised and said he didn’t anything everything was made up," Rangoli Chandel wrote on Twitter.

'Baaghi 3' director Ahmed Khan's comments on Kangana Ranaut's films created quite a stir on Twitter on Wednesday. Khan in an interview with a leading local publication said that Kangana tried achieving success with female-oriented film Manikarnika but eventually incurred a huge loss due to a big budget.

Khan also claimed that Ranaut's next film 'Dhaakad' has also been canned. Reacting to his negative statements, Ranaut's sister and manager Rangoli Chandel didn't leave a chance to bash the director in a series of tweets. Comparing his latest release Baaghi 3's collection to Manikarnika's box-office, Rangoli sent a message to Ahmed Khan saying, 'First cross Rs. 102 crore in India and then we shall talk.'

Kangana Ranaut gets ready to lose 20 kgs for Tejas & Dhaakad, gained it for Thalaivi

Rangoli also called Ahmed Khan an "atrocious filmmaker who hasn't made a good film to date." Dhakaad producer Sohail Maklai who isn't active on Twitter was also furious reading Khan's comments. He cleared the air and said, "Oldest trick in trade, when your ship is sinking, target other! Exactly what #AhmedKhan is doing. Just to gain traction for own trashed film #Baaghi3. Ours #Dhaakad pre production is in full force now & is going on floors June 2020!" [sic]

In no time Rangoli Chandel clarified that Ahmed Khan called Kangana Ranaut and apologised. "Kangana just called she told me Ahmad Khan called her and apologised and said he didn’t anything everything was made up," she tweeted. Dhaakad director also took to his Twitter handle and wrote: "Statements reported in this article by Ahmed Khan are absolutely false.A legal notice will be issued from our lawyers. The delusional statements and negativity is completely uncalled for.DHAAKAD is currently in pre-production and will go on floors this June" [sic]

Not only he made a tacky film but so far even after two Holi Hollidays film dragging itself to 65... he is saying Manikarnika made with a budget of 75cr which did 102cr in India and 53ce worldwide is a waste of money, kahan asli dard ho raha hai? Nemardagi pe ya mullagiri pe? 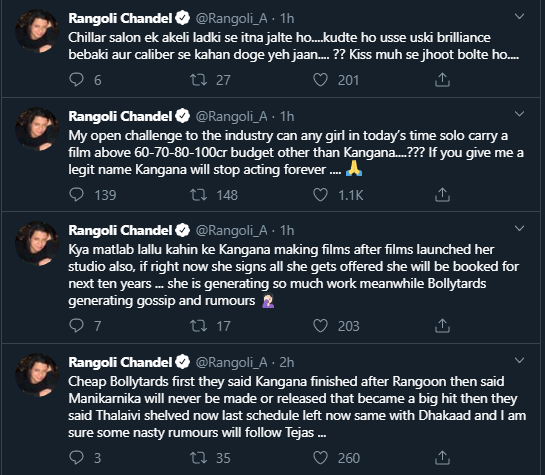 This is from Dhakaad director.... even though Ahmad Khan has called every one and apologised we are still sending him notice .... cos he deserves one .... https://t.co/9F3AcD8hh2