Dr Zeus fumed over not being credited for the track 'Don't Be Shy Again' in 'Bala'. Badshah, who has sung the track, tried to clear the issue by calling him.

The trend of recreating songs has been gaining more and more momentum in recent years, with almost every album having at least one hit from before in a new avatar. While some of them like Aankh Marey and Dilbar went on to become chartbusters, many of them couldn’t work its magic and some received criticism from fans and also from the original artists associated with the track. Not just that, copyright issues also come into the picture sometimes. That’s what happened after the latest track Don’t Be Shy Again from Ayushmann Khurrana’s Bala was unveiled on Friday. Dr Zeus fumed over the makers using the song without crediting him. Even Badshah, who lent his voice to the track, got embroiled in the row, but he said he supported Dr Zeus and wanted to clear the misunderstanding.

The track Don’t be Shy Again features Ayushmann Khurrana dancing with Bhumi Pednekar and Yami Gautam, while Badshah also makes an appearance in it as a rapper. Sachin-Jigar have been credited for the track, which is not exactly a recreation since it has additional parts other than the popular flute tune and the Don’t be Shy lyrics.

Dr Zeus was not pleased one bit and wrote, “Are u guys taking the p**s @sonymusicindia @MaddockFilms @Its_Badshah @SonyMusicUK @SachinJigarLive wen did u compose don’t b shy & kangna.. more to the point how dare u guys b riding off ma old hits & f**kin them up??? Ya need to get original My lawyers will b in touch.” (sic)

Later, Badhshah also tweeted, “I am aware of the situation around ‘Dont be shy’. I want to start by saying that i love And respect  @drzeusworld paaji immensely and he knows it. He has the right to get angry with me because he’s my senior and ive learnt a lot from him. And he is the last person id want to go through something like this. I got on the song, which has been recreated by my dear friends Sachin Jigar, only after making sure we had the necessary rights. But still if there’s any misunderstanding, ill make sure it gets cleared asap. I support Zeus Paaji.” (sic).

It seems that the track didn’t credit the UK-based musician for the track initially, but it was added after he flagged it. When one of the users pointed out that original credits did feature on the YouTube video, he replied, “Only after I tweeted it G!!!”

Dr Zeus also revealed that Badshah had called to clear the issue, and he also stood up for Badshah and Ayushmann when they were being slammed by users. He said that it was not their fault. 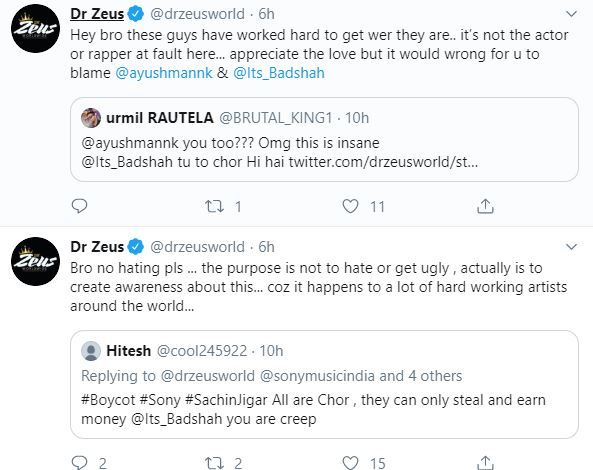 Dr Zeus blamed the music label for the ‘last minute credits’, which he said were totally wrong.

Big respect to @Its_Badshah for actually having the courtesy of pickin up the fone & addressing me about this don’t b shy situation.. I no issues with u bro👊🏼 ya ma fam & always will be. As for @sonymusicindia it’s not bout last min credits!!! that are still totally wrong!!

Dr Zeus had similarly accused Meet Bros for not crediting him as a producer for the chartbuster Baby Doll. Watch the original and recreation: