Irrfan Khan's death news came as surprise to every movie buff in the country. Here is how the ex-contestants of Bigg Boss 13 paid their tribute to the actor.

The entire country has been mourning the loss of the great Indian cinema actor Irrfan Khan. Indian and international audiences all around the world have been talking about his exceptional talent and hard work which let him become one of the most precious assets of the Hindi film industry. After his untimely death on April 29, 2020, at Kokilaben Dhirubhai Ambani hospital, the film and television industry has been coming together to pay respects to the one-of-a-kind actor. Here is a look at how the ex-contestants of Bigg Boss 13 paid their tribute.

1.       Sidharth Shukla took to Twitter to express his grief over the death of the much-loved actor, Irrfan Khan. He has written in the tweet that he was shocked when he heard about Irrfan Khan’s death and that it is a tragic loss to the ‘artistic world.’ He has also expressed his thoughts on how unpredictable life is.

Shocked to hear the demise of Irrfan Khan.. that’s a tragic loss to the ‘Artistic World'! How unpredictable is life!
Rest In Peace!!

2.       Rashami Desai uploaded a compilation of Irrfan Khan’s most impactful dialogues along with a “Rest in Peace” tag. In the caption for the post, she has spoken about all the remarkable characters that Irrfan Khan has played and left the audience with. She has also spoken about the impact he had on her acting career in the caption.

3.       Shehnaaz Gill took to Instagram as she shared a story on her official handle. In the tag for the picture, she wrote about how the great actor will be missed for years to come. She also added a pleasant picture of the late veteran actor. 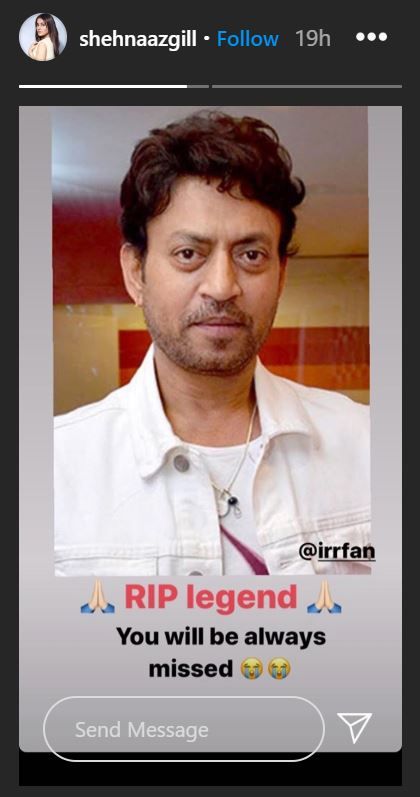 Also read On Irrfan Khan, Mindy Kaling Loves What Tom Hanks Said About The 'coolest Guy In The Room'

4.       Devoleena Bhattacharjee posted a picture of Irrfan Khan as she expressed how unbelievable the incident is. She wrote that she is saddened to hear about the demise of the great personality and actor. She has added towards the end that may his soul rest in peace.

PEOPLE HAVE PLEDGED SO FAR
LATEST NEWS
View all
50 mins ago
Sonam Kapoor misses travelling amid lockdown, says 'all my bags are packed'
14 hours ago
Directors Abbas & Mustan talk about 'Khiladi Kumar', theatre-OTT debate & the times ahead
17 hours ago
Radhika Apte shares mystifying teaser of her first directorial venture 'The Sleepwalkers'
17 hours ago
Katrina Kaif and Ranveer Singh to team up for Zoya Akhtar's next untitled film
3 hours ago
‘Gulabo Sitabo' writer accused of plagiarism, production house calls allegation 'baseless'