From 'Raazi' to 'Madras Cafe' here are some Bollywood spy thriller movies to watch as you wait for Sidharth Malhotra's 'Mission Majnu'. 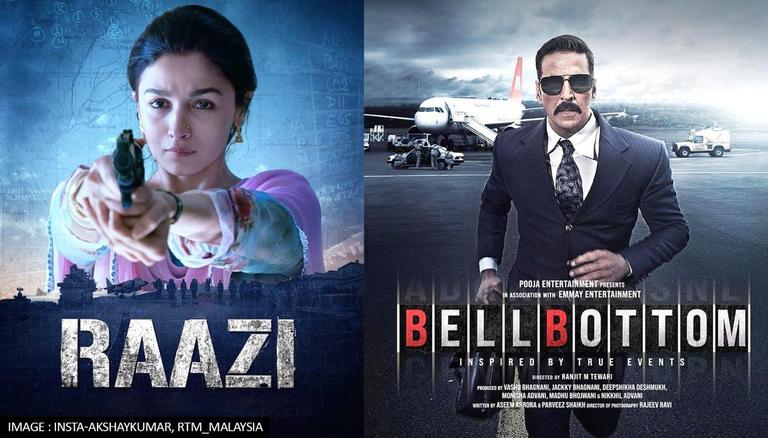 Baby is a spy thriller film that was released back in 2015 and stars Akshay Kumar in the lead role, along with Taapsee Pannu, Rana Daggubati, Danny Denzongpa, Anupam Kher, Mikaal Zulfiqar, Kay Kay Menon, Madhurima Tuli and Rasheed Naz in supporting roles. The plot follows the last mission of Baby; a temporary task force formed in response to the 2008 Mumbai attacks whose job is to find and eliminate terrorists who are planning attacks in India.

Raazi is an adaptation of Harinder Sikka's 2008 novel Calling Sehmat, a true account of a RAW agent who, upon her father's request, is married into a family of military officials in Pakistan to relay information to India, prior to the Indo-Pakistani War of 1971. The movie features Alia Bhatt in the lead role along with Vicky Kaushal, Rajit Kapur, Shishir Sharma, and Jaideep Ahlawat. The movie is one of the highest-grossing Indian films featuring a female protagonist and was also a critical success, with praise for Meghna Gulzar's direction and Bhatt's performance.

Naam Shabana is a prequel to the 2015 film Baby with Taapsee Pannu reprising her role as Shabana. Manoj Bajpayee Akshay Kumar and Prithviraj Sukumaran play important supporting roles in the film. The movie was a critical success and was banned in Pakistan a day after its release.

READ | From 'Sooryavanshi' to 'Eternals': Movies releasing in theatres this November

4. Holiday: A Soldier Is Never Off Duty

Holiday is the official remake of the 2012 Tamil film Thuppakki and follows an Indian Army officer who arrives in Mumbai on vacation and sets out to hunt down the terrorist leader of a sleeper cell network and deactivate the sleeper cells operating under his command.  Akshay Kumar, Sonakshi Sinha and Freddy Daruwala are in the lead roles, while Govinda and Sumeet Raghavan appear in supporting roles. Holiday proved to be one of the highest-grossing Indian films of 2014.

Madras Cafe was released in 2013 and is set in the late 1980s and early 1990s, during the time of Indian intervention in the Sri Lankan civil war and assassination of Indian prime minister Rajiv Gandhi. The movie stars John Abraham, Nargis Fakhri and Raashi Khanna in lead roles. The movie received widespread critical acclaim.

Bell Bottom starring Akshay Kumar released earlier this year and is inspired by real-life hijacking events in India by Khalistani separatists during the 1980s, such as the Indian Airlines Flight 423, 405 and 421 hijackings. The film received mixed to positive reviews, praising Kumar’s and Lara Dutta’s performance.