The oldest member of the band, BTS' Jin turned a year older as he celebrated his 29th birthday on December 4. Check out the singer getting a surprise cake. 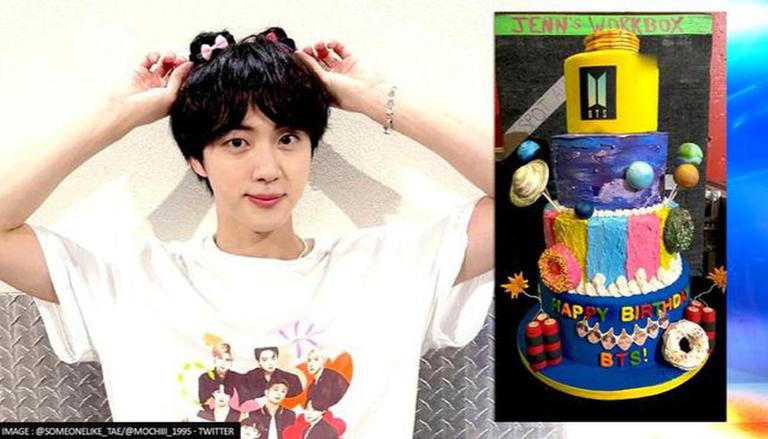 
The popular South Korean boyband BTS is celebrating the 29th birthday of their oldest member, Kim Seok-jin on December 4. The band, fresh off their successful Permission to Dance on Stage concert in Los Angeles, was pleasantly surprised when the ARMY, name of the band's fandom, planned a surprise for the birthday boy. However, the celebration was not done as they were surprised again at an event. Check the video here.

Scheduled on December 4, the seven-member band performed at the 2021 iHeartRadio Jingle Ball Tour after their concert at SoFi stadium. During the event, the band was surprised with a cake to celebrate Jin's birthday. The video of the same was posted on the official social handle where the band was presented with a colourful cake. ARMY at the venue were also seen holding 'Moon bombs' referring to Jin's 2020 hit single 'Moon'.

The video was posted with the caption, ''Couldn’t let @BTS_twt perform without wishing Jin a very Happy Birthday! Celebration time in LA!'' While the cake was appreciated by the band and ARMY alike, several caught on to the text written on the cake which also started the Twitter trend 'Happy birthday BTS'.

ARMY soon noticed that the cake presented to the band had the text 'Happy birthday BTS' written on it despite celebrating Jin's birthday. Bandmate Suga also appeared perplexed while taking a peek at the cake. The video was widely circulated on social media as ARMY reacted to it. One fan wrote, ''Except for the part on the cake where it said Happy Birthday BTS...thats not until June.''

Jin 🥺
When the cakes says "happy birthday bts"
and yoongi was like 😂
HAPPY BIRTHDAY JIN pic.twitter.com/5JkCtLGtHm

Ok Army, so who’s doing the edit on the cake? 😅 The thought is appreciated still, @iHeartRadio thanks! What a way to open the show with a celebration of #WorldwideHandsome silver vocals JIN JIN JIN

YOONGI IS SO FUNNY. HIS REACTION WHEN HE SAW "HAPPY BIRTHDAY BTS" 😭🤣 pic.twitter.com/t5SPZe4L9K

Another fan tweeted, ''Ok Army, so who’s doing the edit on the cake? The thought is appreciated still, @iHeartRadio thanks! What a way to open the show with a celebration of #WorldwideHandsome silver vocals JIN JIN JIN''

After completing their schedule in the US, the band announced their next tour which will be held in their home country South Korea. They also released the holiday remix of their smash hit Butter bringing an early Christmas to their fans. The band also won the Asian Artist Award for Song of the Year for Butter, however, they will reportedly not attend the 2021 Mnet Asian Music Awards due to their conflicting schedule.

WE RECOMMEND
BTS' Jin shatters records as his 'Jirisan' OST soars at No. 1 on iTunes Top Songs charts
BTS' Jin smashes records as his single ‘Yours’ becomes second best-selling song in US
BTS ARMY proud of RM for having their back at 'The Late Late Show With James Corden'
BTS' LA concert Live: Twitter is going gaga over Jin's new apple haircut, 'OMG, too cute'
BTS' Jin's Birthday: BTS ARMY has special surprises planned ahead of his 29th birthday
Listen to the latest songs, only on JioSaavn.com