Richa Chadha disagreed with the 'Bollywood doesn't speak up' claim amid protests against Citizenship Amendment Act. She started thread of names who protested.

The film industry is known for its ‘political correct’ stance. Be it while answering tricky questions on chat shows or the most grave issues grappling the country, some of the major names of the industry invariably maintain silence or shrug it off most of the times. As various parts of the country ‘burned’ over the protests against the Citizenship Amendment Act, once again the ‘Bollywood doesn’t speak up’ claim came to the fore. Richa Chadha, who has been among the most vocal forces against the protests, strongly disagreed to the statement. The actor highlighted all the celebrities who raised their voice, to term ‘Bollywood’ as an ‘imaginary landscape’ and how even its name is derived.

Richa Chadha has been at the forefront of the ‘Bollywood’ representation against the protests being held in various parts of the country against CAA. She has been sharing videos, posts and expressing in no uncertain terms her anger at some of the incidents. But not just her, many other celebrities lashed out at violent scenes that erupted between Jamia Millia students and Delhi Police. As a journalist intended to start a thread on the celebrities from the film industry who had ‘spoken their mind / heart fearlessly’, the Fukrey star responded, “Lisa Ray, Zeeshan Ayoub, Chandan Roy Sanyal, Siddharth, Ali Fazal., Papon, Dippanita, Anubhav Sinha. PLEASE stop say Bollywood doesn’t speak up. Bollywood is an imaginary landscape, even the name is derived. It’s the film industry and it’s not a monolith. Ppl don’t always agree.” (sic) She added, “Vijay Verma, Sayani Gupta, Konkona Sen Sharma, Saba Azad... add to this list if you come across more people... thanks.” (sic)

READ:Protests Continue Over CAA In New Delhi On Sunday Night 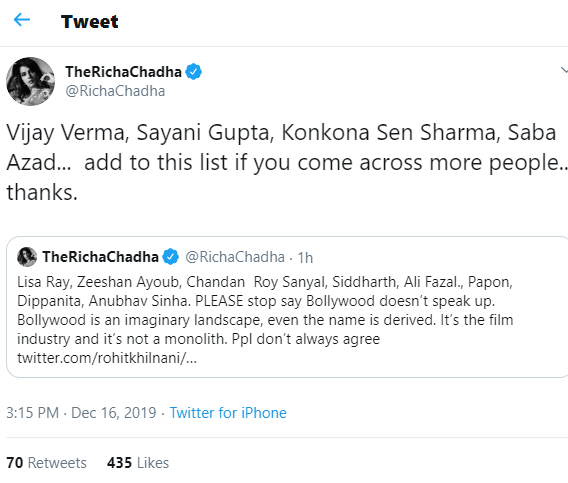 Both houses of the Parliament have passed the Citizenship Amendment Bill that seeks to provide citizenship to refugees belonging to six religions, except Islam, from Pakistan, Bangladesh and Afghanistan. Protests against it started in Assam but has spread to other parts of the country. Several reputed institutions are also witnessing protests.