Amid all the bizarre things happening in 2020, another one to add in the list is — Google showing Anushka Sharma as Afghanistan cricketer Rashid Khan's wife. Don't believe it? See proof below —

There's a reason for the goof-up. In 2018, Rashid Khan named Anushka Sharma as her favourite Bollywood actor in his Instagram chat session, along with Preity Zinta. And because Rashid trended for his answer, Google made a connection and the algorithm allegedly went bonkers — as a result, Anushka was declared Rashid's wife. 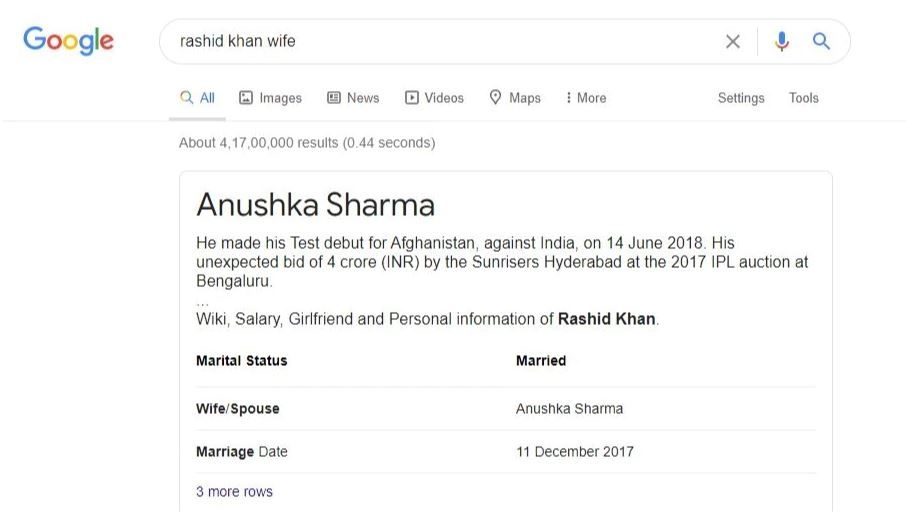 One user commented on the glitch by Google and wrote, "And this happens when your program got confused on data...
So much data to apply mining
So much to store
And so much to retrieve as well
We understand it Google." [sic]

In reality, Anushka Sharma is happily married to cricketer Virat Kohli, and the couple is expecting their first child in January.

Rashid is currently playing for the Hyderabad's IPL team, while Virat leads the Bangalore IPL team.

Bangalore skipper Virat Kohli labelled his team's performance against southern rivals Chennai as one of their most complete performances. Bangalore beat Chennai by 37 runs in the Dream11 IPL 2020 league match at the Dubai International Cricket Stadium on Saturday.

Virat Kohli's unbeaten 90 powered the three-time finalists to a competitive total of 169/4 in their 20 overs. In reply, the three-time champions' run chase was not up to the mark as they were playing a catch-up game after having lost early wickets as the asking rate kept on getting steeper. Ambati Rayudu top-scored with 42 as the former champions were restricted to 132/8. Kohli was adjudged the Man of the Match for his stellar knock.