Ranbir Kapoor and Hrithik Roshan were recently spotted at Namit Malhotra’s office to discuss the epic 'Ramayana', along with the project's makers. 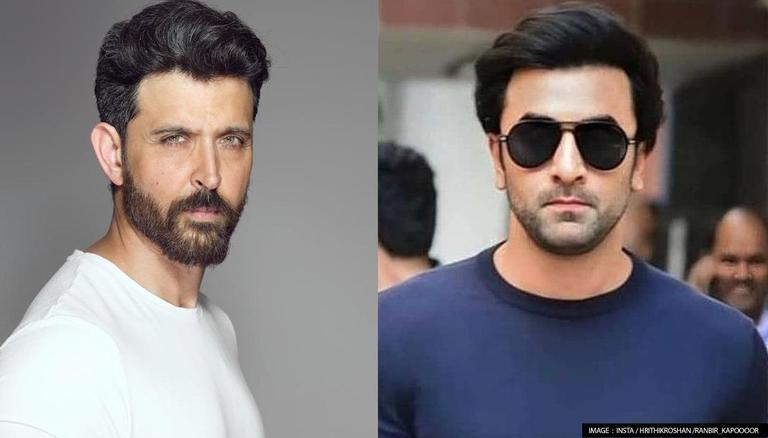 
Bollywood stars Hrithik Roshan and Ranbir Kapoor piqued fans' curiosity after the paparazzi clicked them together, reportedly entering producer Jackky Bhagnani’s office. Speculations were rife about the duo coming together for Bhagnani's upcoming production. However, recent Pinkvilla reports also suggests that the actors were visiting Namit Malhotra’s office to have a discussion around the epic Ramayana, with producer Madhu Mantena and director Nitesh Tiwari.

As per the publication's source, this was the first joint meeting with the leading duo, who are set to essay the roles of Ram and Raavan. The film is being produced by Madhu Mantena, Allu Arvind and Namit Malhotra, with Ravi Udyawar and Nitesh Tiwari helming the project.

The source added that the 'massive vision' of the project, as well as tentative dates of taking it on floors in the second half of next year, were the topics of discussion. Hrithik and Ranbir will helm the roles of Raavan and Ram respectively, however, the female lead, set to essay the role of Sita, is yet to be finalised.

In an earlier conversation with the publication, Madhu Mantena had mentioned that Ramayana's cast will be announced on Diwali, however, the latest reports suggest some delay. The recent meeting marked an 'ice-breaking session' between the important members of the project, with the makers planning to introduce the three leading characters in a 'massive announcement'.

The team wanted to conduct a meeting to discuss  'basic stuff around Ramayana' before Ranbir gets caught up with Luv Ranjan’s next as well as Brahmastra, and Hrithik jets off to Abu Dhabi for the shoot of Vikram Vedha, the source mentioned. The movie, which is being touted as one of Bollywood's most ambitious projects, will mark the first collaboration of the two superstars.

More on the duo's work front

On the work front, Ranbir Kapoor's Shamshera is set to hit the theatres on March 18, 2022. The actor will also be seen alongside Alia Bhatt, Amitabh Bachchan, Mouni Roy and Nagarjuna Akkineni in the superhero movie Brahmāstra. Meanwhile, Hrithik will team up with Deepika Padukone in Fighter, which is being touted as the country's first-ever aerial action drama.