The team behind Rajkummar Rao and Kriti Sanon's film 'Hum Do Hamare Do' released a teaser of the film's song, 'Vedha Sajjeya', which will release on October 26. 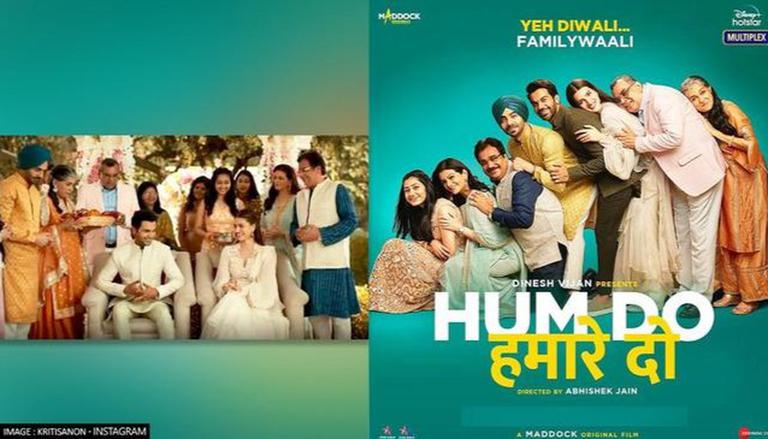 A Hum Do Humare Do new song will release on Tuesday and fans are excited to see the two stars on screen before the release of the film. The 11-second teaser features Rajkummar Rao, Kriti Sanon and Ratna Pathak Shah and will be a romantic number. The short teaser seems to be from the duo's wedding and Sanon also hinted at the same as she mentioned in the caption that the song would be sure to give fans 'shaadi feels'.

Vedha Sajjeya will not be the first song from the upcoming film to release. The romantic number, Kamli released a few days ago and featured some sweet moments from the life of Sanon and Rao's characters and chronicled their love story. The song begins with the two arriving at their marriage ceremony on a two-wheeler. The music video is the perfect compilation of the relationship the two share with each other and gives fans a glimpse into their bond ahead of the film's release.

The trailer of the upcoming film was recently released and featured several heartwarming and hilarious moments. Helmed by Abhishek Jain, the film tells a unique story of adoption, with a twist. The trailer featured Rajkummar Rao, who adopts parents, played by Ratna Pathak Shah and Paresh Rawal to get Kriti Sanon's character to fall in love with him and eventually marry him. The film will mark Kriti Sanon and Rajkummar Rao's second collaboration after the Ashwiny Iyer Tiwari directorial Bareilly Ki Barfi. The aim of the film is to highlight that the bond between members of a family does not only depend on if they are related by blood.

READ | Kriti Sanon, Rajkummar's 'Hum Do Humare Do' trailer to release on Oct 11; new poster out