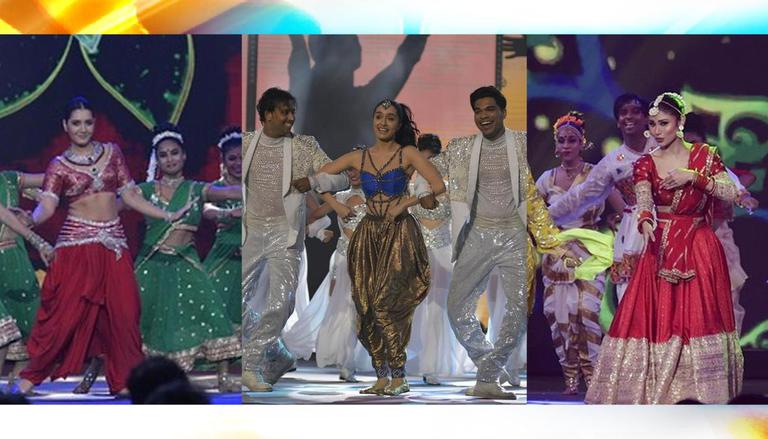 
The 52nd International Film Festival of India has already begun in Goa. The annual film festival is set to be a celebration of artists and cinema, not just Indian, but from across the world. The festival is set to be conducted for over nine days after its commencement on Saturday, November 20. The festival's first day began with powerpack performances of several Bollywood stars, including Shraddha Kapoor and Mouni Roy.

On the occasion of IFFI's opening ceremony, several film stars and fraternity from politics were joined hands in the celebration of art and cinema. The event also had several people from the film industry across the globe. Shraddha Kapoor, Mouni Roy and several other divas delivered powerful and commendable performances at the opening ceremony.

Shraddha Kapoor looked mesmerising in her performance at the International Film Festival of India. The actor wore a blue coloured top with golden bottoms in her performance. She also accessorised her look with some jewellery. In between her performance, the actor also did some outfit transitions.

READ | IFFI kickstarts in Goa today; Here's all you need to know about awardees, films & schedule

Gold star Mouni Roy went for a traditional dance form for this year's IFFI. The actor looked elegant in her red ethnic ensemble. She wore a red coloured blouse with a matching lehenga. The Nagin actor accessorised her look with white floral jewellery and red bangles.

Raashi Khanna also graced the stage of IFFI in Goa on November 20. The Bhramam actor donned a traditional Maharashtrian look for her performance. In her eyes-turning performance, the actor wore a red blouse and red bottoms. Her diamond-studded jewellery added to her outfit's beauty.

READ | IFFI to honour Dilip Kumar, Christopher Plummer & others for their contribution to cinema

The much-adored Bollywood couple Genelia D'Souza and Riteish Deshmukh also came together for a performance in the opening ceremony. Genelia wore an orange kurta with green bottoms in her dance, while Riteish Deshmukh a matching orange jacket. The couple is often in the headlines for their new product launches and viral Instagram reels.

IFFI is being held in Goa from November 20 to 28. Among the awardees, the event will also have Member of Parliament, Hema Malini. She will also be honoured with the Indian Personality of the Year.