IIFA 2022: Aishwarya & Abhishek Stun At Gala Event, Get Reminded About 15 Yrs Of Wedding

Attending IIFA awards 2022 after long hiatus, Aishwarya Rai who will be completing 15 years of togetherness with husband Abhishek Bachchan shared her happiness. 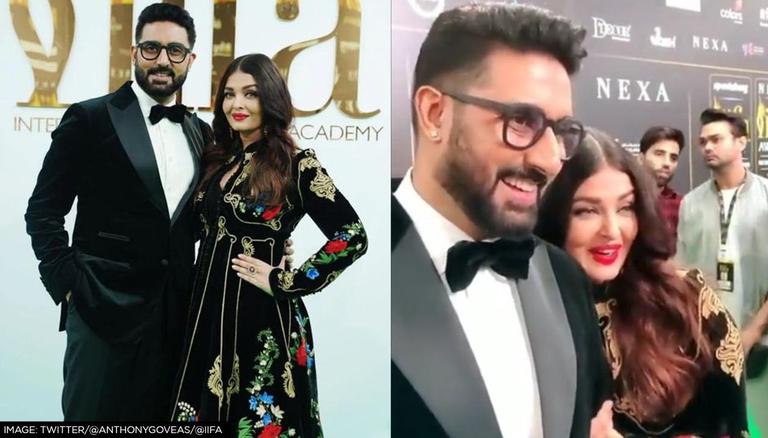 
It's been almost 13 years since actor Aishwarya Rai graced the IIFA awards red carpet. Coming back after a long hiatus, the actor who will be completing 15 years of togetherness with husband Abhishek Bachchan, looked every bit excited to be a part of the starry night. Exuberating grace and charm on the green carpet while wrapping her hand around Abhishek, the couple took away the hearts of their fans.

This year, the glitzy night was more special for the two stars as Abhishek performed at the event on some of his peppy tracks while his wife and daughter Aardhya were present to 'cheer' for him. During the green carpet, the star couple was reminded about the relationship milestone at IIFA 2022 recently, and their reaction will just leave you in awe.

Reminding the two stars about completing 15 years of marriage, left the Ae Dil Hai Mushkil actor blushing. She smiled and said, "Aah thank you, oh my god, yes.” Abhishek then revealed how IIFA has always been special for his entire family. "IIFA has always been very special and it's like family. It's so wonderful to come back and be around with other stars."

Aradhya's jubilation had to be heard and seen loud and clear. @SrBachchan sir would have been overwhelmed if he'd have seen the roar in Ethihad Arena for Abhishek.. pic.twitter.com/Frx8LnD1ER

Aishwarya then interrupted and said, "We are here to support the fraternity and watch him perform and cheer for him." Abhishek's performance was the talk of the gala event as he dethroned all the young stars with his energy levels and spectacular moves. The actor's performance was even special after Aishwarya and their daughter joined them later.

A video of him was shared on Instagram by IIFA that shows Abhishek pumping up the crowd while performing on India Wale from Happy New Year and Macha Macha from Dasvi. For the event, Aishwarya looked gorgeous in a black Anarkali dress with colourful details while Abhishek twinned in the same colour as he donned grey pants, a white shirt, and a velvet blazer with a bowtie for the green carpet.