Satyajit Ray and Gulzar are two of the Indian film industry's most acclaimed and iconic filmmakers. The two celebrated filmmakers were in news recently, thanks to the International Film Festival of India. Considered to be one of the most significant film festivals in the Asian continent, the International Film Festival of India recently confused Gulzar with the late filmmaker Ray.

Read International Film Festival Of India: Insights About The 50th Edition Of The Festival

The official website for the film festival has a catalogue of all the films being screened. The catalogue also mentioned Ganashatru and included the name of the director, editor, screenplay-writer and other people involved in the making of the film. However, the organisers used the image of Gulzar in place of Satyajit Ray which appears at the bottom of the listing to serve as a bio for the director. 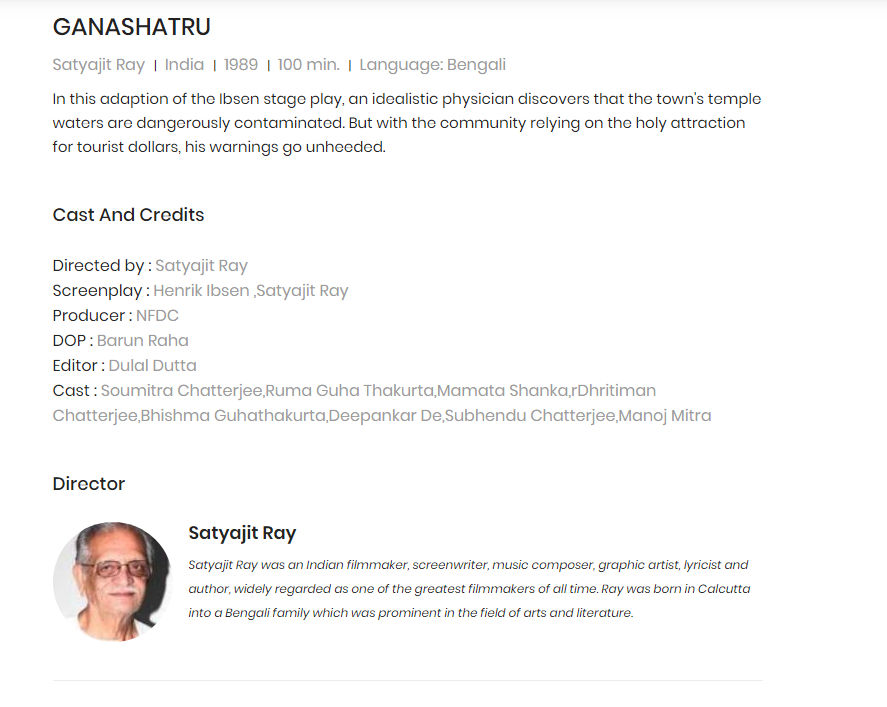 About the filmmakers Satyajit Ray and Gulzar

Satyajit Ray was an Indian filmmaker, screenwriter, music composer, graphic artist, lyricist, and author and is widely regarded as one of the greatest filmmakers of all time. Born into a Bengali family that was prominent in the field of arts and literature, Ray became a filmmaker with the 1955 film, Pather Panchali, which is considered to be one of the greatest films of all-time. In his three-decade-long career, the iconic director made films such as Shatranj Ke Khiladi, Goopy Gyne Bagha Byne​​​​​​, Charulata, Kanchenjunga among other films. Before his untimely demise in 1992, he was awarded an Academy Honorary Award and the Bharat Ratna, the highest civilian award in India.

Gulzar is an acclaimed film director, lyricist, and poet. He has worked with numerous film directors over the course of his five-decade-long film career and also directed films such as Aandhi, Mausam, Maachis, Hu Tu Tu, among others. In 2009, Gulzar won the Academy Award for Best Original Song for the song, Jai Ho, along with A.R.Rahman. He is married to veteran film actress Rakhee and together they have a daughter, Meghana Gulzar, who directed the Alia Bhatt-starrer Raazi and is preparing for her next release, the Deepika Padukone-starrer Chhapaak.

Read IFFI 2019 Attendees Include Some Of The Most Popular Bollywood Celebs; See Photos Here