Bollywood actor Irrfan Khan passed away on April 29 at the age of 53 at Mumbai’s Kokilaben Dhirubhai Ambani Hospital and Medical Research Institute, Mumbai. Since the news of Irrfan Khan’s untimely demise jammed the internet, celebrities from across the globe paid tribute to the legendary actor. Bollywood actors Kiara Advani, Siddhant Chaturvedi and Neena Gupta too paid their respects on social media. Read details.

Yesterday, Kabir Singh actor Kiara Advani took to her Instagram story to share her heartfelt condolences. Posting a picture of Irrfan Khan, Kiara wrote, "Sad day for Indian cinema, rest in peace Irrfan Sir. An actor who inspired our generation world over with revolutionary performances. Heartbreaking loss. We pray for strength for your family". 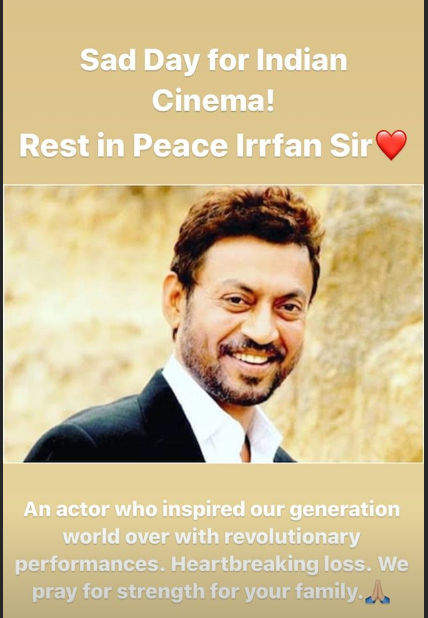 Also Read | 'Irrfan Khan stood out for his generosity as an artist': Angelina Jolie remembers the star

"Bohat yaad ayegi tumhari Irfan", penned Neena Gupta, who shared a video of herself, expressing condolences to Irrfan Khan's family and his wife Sutapa. "I am so sorry Sutapa", said Gupta, who knew her for a long time. Check out her post here.

Here is a statement released by his team upon his passing:

"I trust, I have surrendered”; These were the some of the many words that Irrfan expressed in a heartfelt note he wrote in 2018 opening up about his fight with cancer. And a man of few words and an actor of silent expressions with his deep eyes and his memorable actions on screen. It’s saddening that this day, we have to bring forward the news of him passing away. Irrfan was a strong soul, someone who fought till the very end and always inspired everyone who came close to him. After having been struck by lightning in 2018 with the news of rare cancer, he took life soon after as it came and he fought the many battles that came with it. Surrounded by his love, his family for whom he most cared about, he left for heaven abode, leaving behind truly a legacy of his own. We all pray and hope that he is at peace. And to resonate and part with his words he had said, “As if I was tasting life for the first time, the magical side of it."