Kajol Devgn is a prominent actor of Bollywood is known for both her acting as well as quirky and sassy personality. Here are some of the sassy replies of hers

Kajol Devgn is one of the veteran actors in Bollywood who has been a part of the industry for more than two decades. The actor has given Bollywood some of the iconic characters from Anjali from Kuch Kuch Hota Hai to Mandira from My Name is Khan and of course, everyone remembers the legendary dialogue, "Kuch Kuch Hota Hai Anjali, Tum Nai Samjhogi" which was filmed on Kajol. The actress along with her acting abilities is also known for her sass. Hence, here are some of the sassy replies by Kajol:

Also Read | Fan Asks Kajol If She Would Marry SRK Had She Not Met Ajay Devgn, Her Answer Is Hilarious

1) Kajol gave a sassy reply to a fan on Instagram

The My Name is Khan actor decided to reply to all the questions that she received from her fans on Instagram. So, one of the fans asked her whether would she get married to SRK if she would not have met Ajay Devgn. To which, Kajol being her sassy self replied saying "Isn't the man supposed to be proposing." 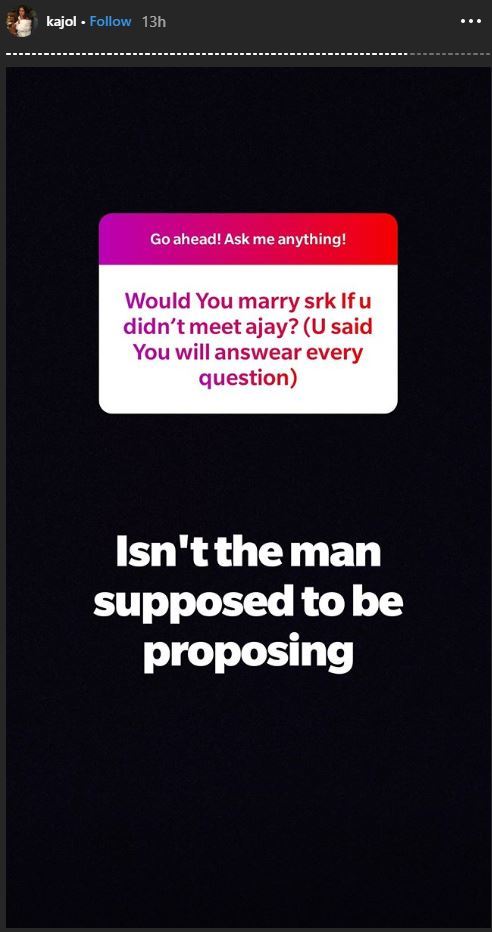 2) Kajol does not want her friend to become Ajay's friend

Both Kajol and her husband Ajay attended one of the eminent talk shows together. The host of the show is a very close friend of Kajol but does not share the same chemistry with her husband. When the host asked Ajay to be friends with him, the Helicopter Eela actor was quick to intervene in the conversation saying she does not want him to be Ajay's friend because he is her friend.

In an interview with an esteemed channel, Kajol was asked that what would hypothetically be her last film if she wants it to be a blockbuster film, to which, she swiftly reminds the interviewer that she has already done a blockbuster film titled Gupt.

In other news, the actress is currently busy promoting her upcoming film with husband Ajay Devgn titled Tanhaji: The Unsung Warrior. The period drama also stars Saif Ali Khan as the antagonist in the film and is helmed by Om Raut.