Actor Kangana Ranaut, who has been receiving spectacular reviews for her latest political drama 'Thalaivii', is overwhelmed by the love of her fans. 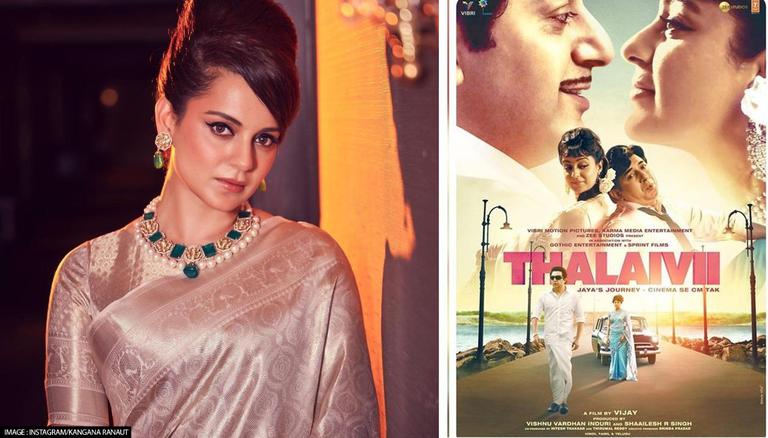 
Actor Kangana Ranaut, who has been receiving spectacular reviews for her latest political drama Thalaivii, is overwhelmed by the love. The actor, who is seen playing the role of late former Tamil Nadu CM J Jayalalithaa in the film, took to her Instagram stories to profess her love for her fans. In her heartfelt note, Kangana revealed that rarely a film is loved 'passionately and unanimously’ by the people and she is glad to know that Thalaivii is one such film.

She motioned that she is glad to know that people are now recognising 'Purchai Thalaivi J. Jayalaithaa’s story'. Expressing her love for the same, she wrote, “Rarely a film loved passionately and unanimously…and Thalaivii is one such film. I am glad people getting to know Purchai Thalaivi Dr J Jayalalithaa’s story. Also, big thanks to my team for making a film which is shining diamond in my filmography. #Gratitude[sic].”

The actor who had to undergo massive body transformation for the film recently took to Instagram and penned her journey of gaining 20 kg’s for the role and then shredding them. "Gaining 20 kgs in 6 months and losing it all within 6 months that too in my thirties messed up many things in my body ….I also have permanent stretch marks as well but art comes to life with a price and more often than not price is the artist him/herself #thalaivii"[sic]," she captioned the post while sharing a picture of herself before and after losing 20 kgs weight. 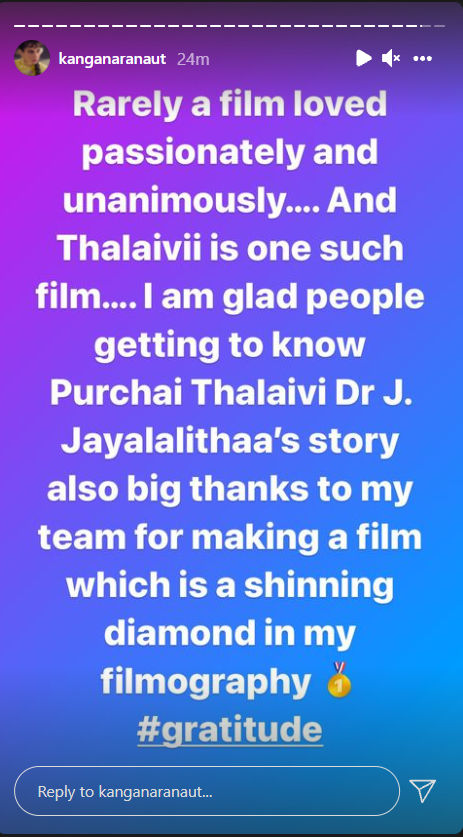 Helmed by A L Vijay and written by K V Vijayendra Prasad, Thalaivii opened with warm reviews in theatres earlier this month. However, the film suffered losses due to COVID pandemic restrictions as theatres in Mumbai and Kerala are still closed. After releasing the film for two weeks, the makers have now released it on the OTT platform Netflix on September 25. Notably, the Hindi version of Thalaivii has been released on Netflix, however, the Tamil and Telugu version of it is scheduled to stream after two weeks. Meanwhile, Thalaivii was earlier slated to hit the theatres in April but was pushed ahead owing to the second wave of COVID that hit India.