Kangana Ranaut's face-off with the Uddhav Thakeray-led Shiv Sena continues with the Queen actor receiving enormous support from people & politicians around the country.

Kangana Ranaut's face-off with the Uddhav Thakeray-led Shiv Sena continues with the Queen actor receiving enormous support from people & politicians around the country.

In the latest development, sources have informed Republic TV that actor Kangana Ranaut has sought Rs 2 crore worth damages suffered due to the 'illegal demolition' of her office from the Brihanmumbai Municipal Corporation (BMC).

Kangana Ranaut's Manikarnika Films office at Pali Hill, Bandra, was partially demolished by the BMC on September 9, even as the actor was enroute Mumbai from her hometown via Chandigarh.

Kangana Ranaut has filed an amended petition before the Bombay High Court, seeking the damages to be paid by BMC following the unlawful demolition of a part of her office.

Shiv Sena has continued to target Kangana Ranaut amid their face-off involving controversial statements and actions, this despite the actor now having left Mumbai. In the latest, the party’s Member of Legislative Assembly Pratap Sarnaik used the ‘dog’s tail remains crooked’ proverb for the actor. The politician added that the Tanu Weds Manu star had blackened the faces of all those who had supported her as she left Mumbai.

"As soon as I landed in Chandigarh, my security is for name purposes only, people are happily greeting me, it seems I have survived this time. There was a time when I saw Mumbai as my mother's protective lap, today I just feel grateful that I survived the city. As soon as the Shiv Sena turned into Sonia Army, only terrorism in the administration prevails," she said.

After leaving Mumbai on Monday morning, actor Kangana Ranaut landed in Chandigarh. The actress is currently en route to Manali.

Kangana Ranaut on Monday left her residence for Mumbai Airport from where she will head to her hometown in Himachal Pradesh. After 6 says in Mumbai, the actor left for Manali with CRPF protection. 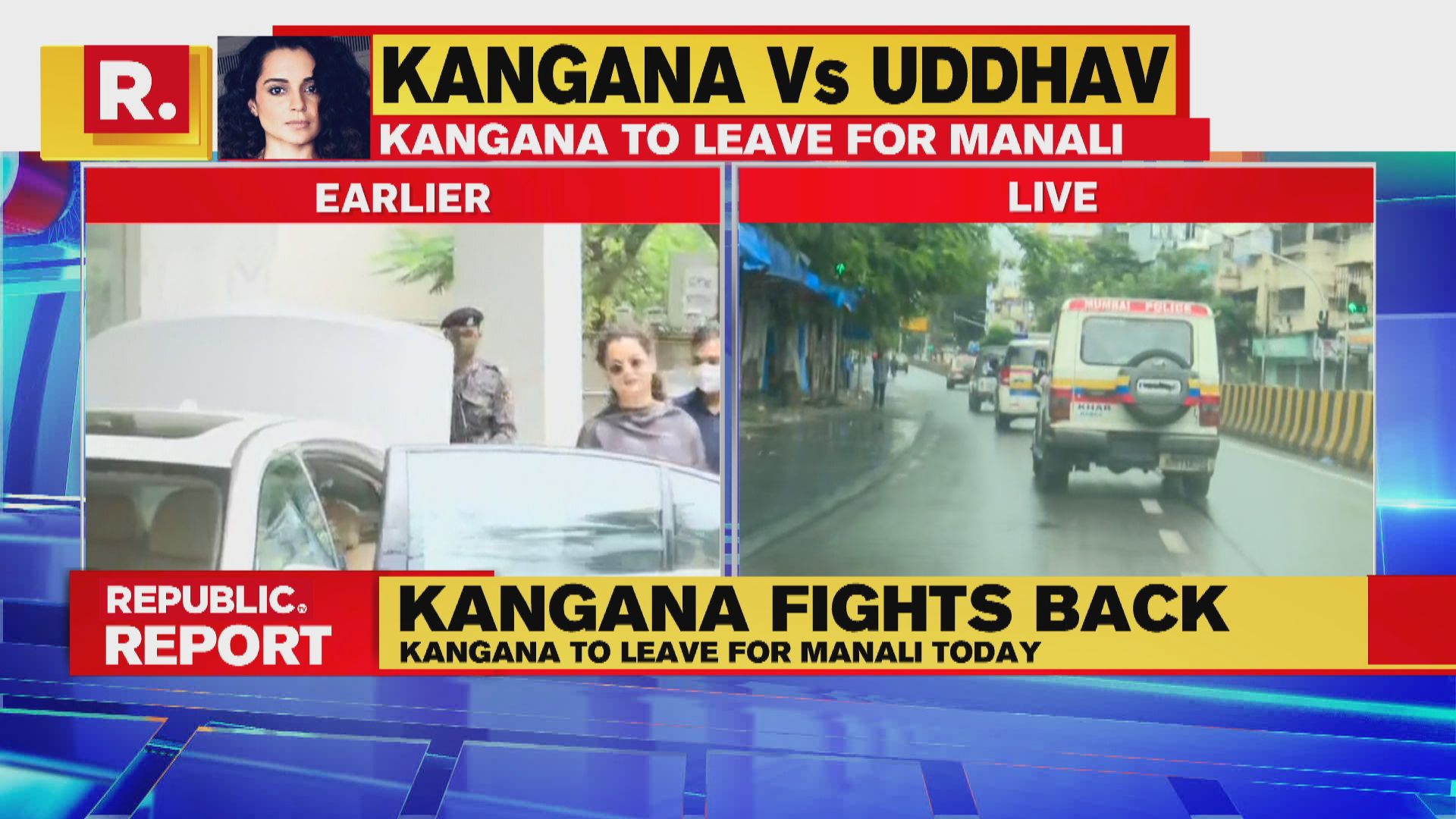 Senior BJP leader Devendra Fadnavis on Sunday dismissed speculations that the ruling NDA in Bihar may rope in Bollywood actress Kangana Ranaut as one of its star campaigners for the upcoming assembly elections in the state. Fadnavis also took potshots at Uddhav Thackeray, who has succeeded him as Maharashtra chief minister, saying that the Shiv Sena chief seemed to be "more interested in fighting Kangana than battling corona".

Kangana Ranaut on Sunday took to her Twitter handle and wrote that she explained her point of view to Maharashtra Governor Shri Bhagat Singh Koshyari. She said, "I met Governor Koshyari & told him about the unjust treatment I've received. I hope justice will be given to me so that the faith of all citizens including young girls, is restored in the system. I am fortunate that the Governor listened to me like a daughter."

To listen to her full briefing to media, click here

A short while ago I met His Excellency the Governor of Maharashtra Shri Bhagat Singh Koshyari Ji. I explained my point of view to him and also requested that justice be given to me it will restore faith of common citizen and particularly daughters in the system. pic.twitter.com/oCNByhvNOT

Maharashtra Governor Bhagat Singh Koshyari on Sunday took to his Twitter handle to share some pictures from his meeting with Bollywood actor Kangana Ranaut.

Kangana Ranaut in her meeting with Maharashtra Governor said that she is feeling unsafe. She said, 'Mumbai is my Karmabhoomi and I can't be thrown out. Will continue to raise my voice even though I am being threatened.' She said that the Governor heard her like his daughter and hopes she will get justice in her fight against Shiv Sena and BMC.

#LIVE | "I am honoured that Governor met me. I talked about how I have been treated in Mumbai which has given me so much. I hope I get justice," says Kangana Ranaut after meeting Governor