Kanika Kapoor's 'missing' Friend Who Was With Her At Hotel Found; Health Report Surfaces

Kanika Kapoor's 'untraceable' friend, who was with her at hotel, was finally found. His health report, where he has been suggested quarantine, surfaced.

Kanika Kapoor’s ‘untraceable’ friend, who was with her at Taj Hotel at one the gatherings the COVID-19 positive patient attended, has been found. The person named Ojas Desai is under home quarantine in Mumbai after testing negative for COVID-19. The medical report of the Mumbai-based entrepreneur has also surfaced.

As per a PTI report, the Lucknow Police was on the lookout of Desai, as he was the only one out of 260 people, who Kanika interacted with, that they could not track. Chief medical officer (CMO) Dr. Narendra Agarwal was quoted as saying that they could not trace him as they did not have his exact address in Mumbai. He was reported to have been with Kanika at Taj Hotel and left on March 16.

In his medical report by Kasturba Hospital in Mumbai, apart from his name Ojas Desai, age 41, his date of admission and discharge has been mentioned as 22 March.

Points like ‘close contact with COVID positive patient’, ‘asymptomatic’ and ‘negative’ for COVID-19 are mentioned, apart from being suggested ‘strict home quarantine for 14 days.’ Apart from the ‘Proud to protect Mumbaikars: Home quarantined’ stamp till 04/04/2020, he has also been asked to visit again if any symptoms appear. 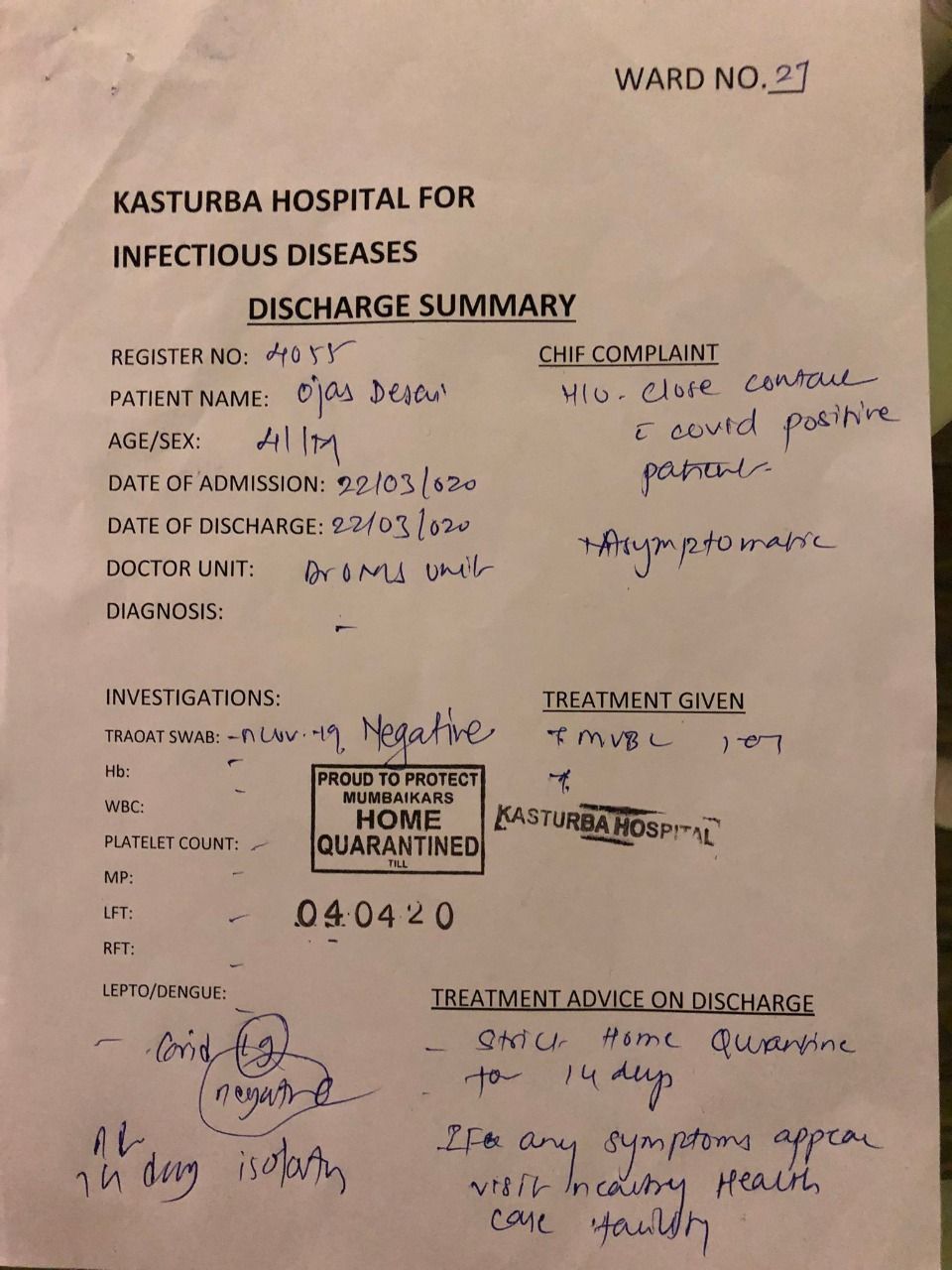 Kanika, meanwhile, is currently undergoing treatment in quarantine at the Sanjay Gandhi Post Graduate Institute of Medical Sciences (SGPGIMS) in Lucknow. Her second test for the contagious disease has also come positive after family raised concern over the first report.

Kanika confirmed on Friday that she had tested positive for COVID-19 after experiencing symptoms for four days. However, there was a controversy before her announcement and even after it, first with reports of her hiding her travel history and hiding in the airport washroom, and then for attending ‘parties involving 400 people’ post her return from London and possibly infecting others.

She denied both the reports, clarifying that she attended only small gatherings since then.

Like Ojas Desai, former Rajasthan CM Vasundhara Raje and son Dushyant Singh, who were a part of one of these gatherings, tested negative for COVID-19.

Meanwhile, numerous cases have been registered against Kanika for ‘negligence.’