Ever since actor Kartik Aaryan has purchased a swanky car, he has been receiving tons of compliments from the people including CISF officials at the airport. 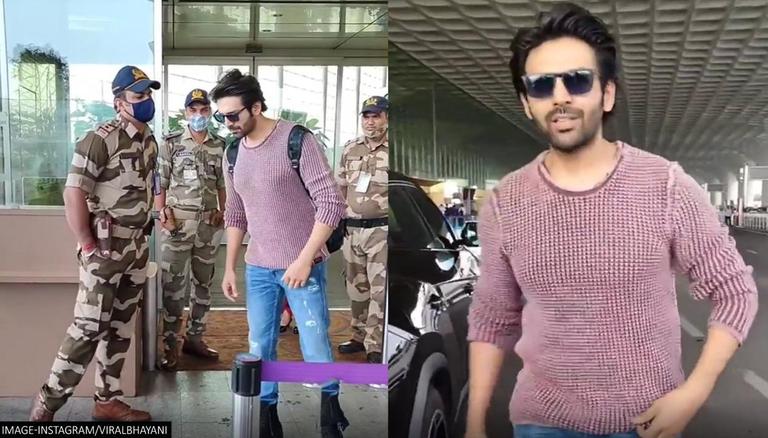 
Ever since actor Kartik Aaryan has purchased a swanky car, he has been receiving tons of compliments from people. The recent compliment the actor got was from a CISF official at the Mumbai airport on November 14. A video shared by a paparazzi account has been going viral on social media where Kartik reached the airport in his own car and how it grabbed eyeballs.

In the video, the actor, who is looking forward to the release of his next film Dhamaka, stepped out of his luxury car and greeted the paparazzi. The actor picked up his bags and walked to the gate when the cameramen hyped him. A man was heard praising Kartik's sunglasses. The Bhool Bhulaiyaa 2 star replied, “Shades bhi ache, meri pant bhi sexy (My shades are good and my pants are sexy),” referring to Govinda's popular song. However, Kartik got serious once he turned towards the CISF officials standing at the airport gate. He folded his hands and spoke to them for a few seconds.

Since everyone can be seen wearing a mask, the conversation between the officials and Kartik was not audible. Although their conversation wasn't audible, the officer did lean in and told Kartik something which led to Kartik turning towards his car and pointing at it. “Oh, the car? Thank you,” he said before he thanked everyone and entered the airport.

The sweet gesture won the hearts of the fans who praised Kartik’s generosity. One of the users wrote, “One of the most honest, genuine, and down-to-earth actors right now[sic].” Another user echoed similar sentiments and wrote, “How sweetly he stands there talking to the Airport security[sic].” A third user echoed similar sentiments and wrote, “The way he is responding to everyone is love[sic].” 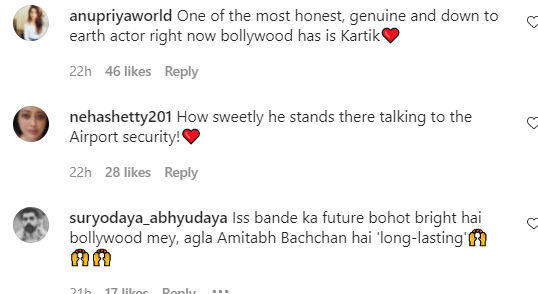 Earlier, Kartik and his luxurious car garnered attention on social media after he stopped by a Chinese van on his way back home and was seen eating on the bonnet of his car along with his friend. Meanwhile, on the work front, Kartik will next be seen in Bhool Bhulaiyaa 2, alongside Tabu and Kiara Advani. He will also be seen in Hansal Mehta’s next directorial venture, Captain India. He also has Shashanka Ghosh’s Freddy and Rohit Dhawan directorial Shehzada in his kitty.