Kriti Sanon and Kartik Aaryan's banter on his photo asking fans whether to shave beard or not is unmissable. Read on to see Kartik's hilarious reply to Kriti.

Kartik Aaryan posted a picture of himself where he asked his fans for their opinion and suggestion to help him decide what to do. The actor asked his fans in a quirky way whether he must shave his beard or keep the stubble that he was sporting. As soon as the post went up, it got flooded with comments and reactions. Fans, as well as Bollywood celebrities, had divided opinions. But Kriti Sanon's comment caught everyone's eye. Check out the picture shared by Kartik Aaryan below.

Kartik Aaryan asks fans if he should clean shave his beard

Read | After Kriti Sanon Opened Up On Kartik Aaryan Getting All The Praise For 'Luka Chuppi', Their Twitter Banter Is Unmissable

Kriti Sanon and Kartik Aaryan's banter on his photo

The banter between Kartik and Luka Chuppi co-star, Kriti Sanon was enjoyed by the fans the most as she gave him her opinion. Kriti Sanon gave the actor her opinion and suggested he must go for a clean-shaven look. Kartik Aaryan took this as an opportunity to pull her leg by pressing a sore vein of every girl amid the lockdown. He responded telling her that he would clean his beard very conveniently but further mocked her asking how will she get her eyebrows done amid the lockdown. 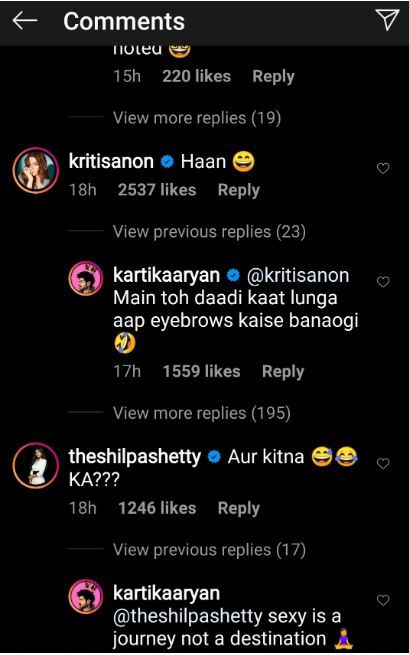 Apart from Kriti Sanon, many other Bollywood celebrities like Shilpa Shetty, producer Warda Khan S Nadiadwala, and many more commented on the post as well. Shilpa Shetty asked Kartik how much more sexy does he want to look than he already is, referring to Kartik Aaryan's caption on the post where he wrote that his heart is willing to look sexy once again. To that remark of Shilpa Shetty, he replied that looking good is a journey and not a destination.

Read | IN PICS | Kartik Aaryan Has Finally Got Sara Ali Khan’s Address, But Why Is He Playing ‘Luka Chuppi’ With The Paparazzi?

PEOPLE HAVE PLEDGED SO FAR
LATEST NEWS
View all
2 mins ago
Rani Mukerji appreciates Mumbai Police for the efforts during pandemic; see video
1 hour ago
A look back at Wajid Khan's journey: All you need to know about the famous music composer
1 hour ago
Music composer Wajid Khan laid to rest
1 hour ago
Amitabh Bachchan has sung these popular songs: Read full list
8 mins ago
'May your beautiful soul rest in peace': Salman Khan mourns untimely demise of Wajid Khan