Maharashtra's Water Resources Minister and NCP leader Jayant Patil, and Bollywood actor Rajkummar Rao on Saturday praised Bollywood actor Sonu Sood for arranging buses for migrant workers desirous of returning to their homes. Rao shared a fan artwork of Sonu Sood as a superhero who is pushing a bus full of travellers in the illustration and wrote, "Agar Hero Banna hai to Sonu Sir jaisa bano"[Translation: If you want to become a hero, be like Sonu Sood].

Noting that Sood has played a villain in some of his films, the water resources minister termed the actor as an "inspiring hero" in reality. "Sonu Sood is arranging buses for migrants who want to go back to their homes. He is trying to help as many migrants as he can. The on screen villain is an inspiring hero in reality! God bless him @SonuSood," tweeted Patil, who heads the state NCP unit.

He also shared a picture of Sood standing near the buses reportedly arranged by him to ferry migrant workers. 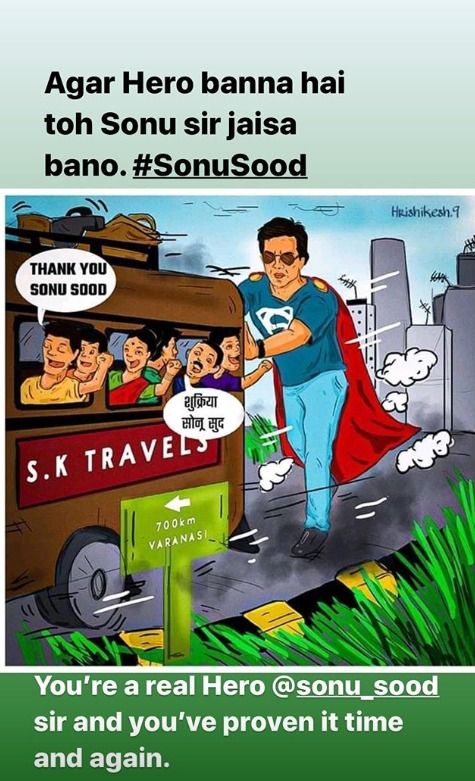 In addition to facilitating migrants with transportation facilities, Sonu Sood also donated over 1500 PPE kits to the healthcare workers across Punjab. Sood also made his Mumbai hotel available for the accommodation of the paramedics. Furthermore, the Happy New Year actor also fed thousands of underprivileged people in Bhiwandi with a meal during the month of Ramazan.

After Karnataka, Sonu Sood arranges buses for migrant workers of UP amid crisis

Let’s fight the battle aginst #Covid19 together! Join me in the #ShaktiAnnadanam drive and let’s make sure that no one sleeps hungryðŸ™ @goel.neeti Link: In Bio

PEOPLE HAVE PLEDGED SO FAR
LATEST NEWS
View all
1 hour ago
I pick up notes and moments from everyday life: Shoojit Sircar on his cinema
2 hours ago
Casting director Krish Kapur passes away at the age of 30 in a road accident
3 hours ago
Cyclone Nisarga: Sanjay Dutt, Sidharth Malhotra urge fans to follow guidelines
3 hours ago
Kartik Aaryan reveals why he wants to marry a girl like Deepika Padukone; Read here
4 hours ago
Abhishek Bachchan issues a 'Nisarga' warning to Mumbaikars about situation getting worse