As Neena Gupta is celebrating her 63rd birthday today, her fashion designer daughter Masaba Gupta recently shared some of the iconic moments of her mom's life. 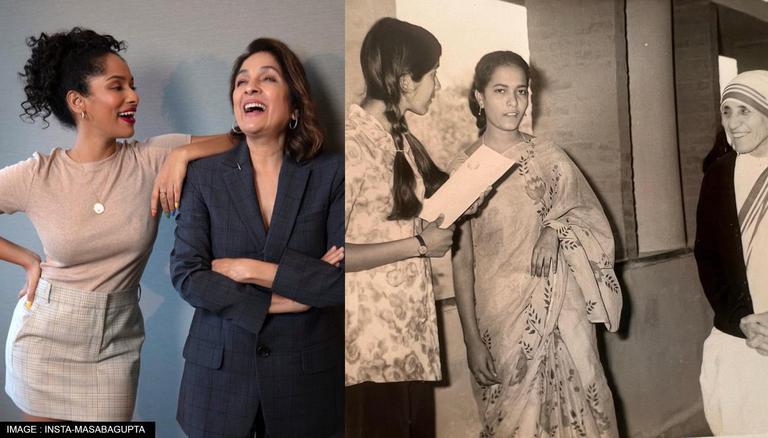 
Bollywood star Neena Gupta is known for breaking stereotypes with her style for years. The actor is an inspiration for many as she had always defied the patriarchal norms throughout her life. Despite being in her 60s, the actor has a jam-packed work schedule and is set to star in a number of films. As the Badhaai Ho star is celebrating her 63rd birthday today, her fashion designer daughter Masaba Gupta recently shared some of the iconic moments of her mom's life on Instagram through a series of photos, which also included a picture of Neena Gupta with Mother Teresa.

Taking to her Instagram handle, Masaba Gupta recently shared a series of throwback pictures of her mother Neena Gupta to wish the latter a happy birthday. The series of monochrome photos saw various stages of Neena Gupta's life. The pictures had the actor's still from a movie, a photo of her with baby Masaba and more. One of the photos also saw Neena Gupta having a word with Mother Teresa. In the picture, the Panchayat star could be seen donning a saree while she stood beside a smiling Mother Teresa.

Sharing the photos, Masaba Gupta penned a heartfelt note for her mother and also called her "THE GREATEST." The caption read, "I mean, find me a more powerful icon! THE GREATEST !" "Happy Birthday Mom!" the Masaba Masaba star added. Many celebrities wished the 63-yar-old actor on her special day. Her fans also showered her with love as one of them commented, "I have always said @neena_gupta ji has been ahead of her time...she is indeed an icon! Happy birthday to you Neena ma'am!"

Neena Gupta, who was recently seen in the Amazon Prime web series Panchayat Season 2, has several projects lined up in her kitty. The actor is all set to star alongside Anupam Kher, Boman Irani, Amitabh Bachchan and Parineeti Chopra in Sooraj Barjatya's upcoming film Uunchai. The actor will also feature in Goodbye, which stars Amitabh Bachchan and South star Rashmika Mandanna, and Netflix's Masaba Masaba Season 2 alongside hr daughter Masaba Gupta. The actor also has a film named Shiv Shastri Balboa with Anupam Kher in the pipeline.